Leisurely. That is how we started our day off. Fortunately for me, Chapitel left its bar unlocked so I was able to find a table, and a light switch, to do some writing before Sally got up. Arriving around 6:30am, the morning crew was kind enough to give me a pre-opening cafe con leche and an opportunity to practice defiling the Spanish language. At first feeling like I didn’t have the right words, I’ve since discovered that even when I do, my accent or pronunciation muddles it enough that they still can’t understand me. Oh well, I’ll keep trying.

The first priority of our day was our plan to attend Mass at San Miguel – St. Michael the Archangel. A large cathedral looming above our hotel and much of the city. Climbing up to it, we soon discovered that the website I referenced had incorrect information and the church was closed. There are no less than 5 churches in Estella – we are able to see their steeples and hear their bells. It appears that they rotate services and we were unable to decipher the schedule.

Plan B was to explore options for Sally’s blisters, one of which now looked like a small balloon on her foot. In researching the Camino, we were introduced to a product called Compeed that is placed on the blister as it is forming and helps protect it and heal the skin underneath. We wrapped her toes with this product and went to a shop to get some socks with toes to help isolate the culprits. Today’s goal was to stay out of our hiking shoes and give our feet a chance to breath. The standard off-trail peregrino uniform includes sandals and some form of limp. We weren’t limping today but we were walking slowly as we managed around the aches. New socks in hand, we proceeded to los correos, the post office, to get some stamps. I scored a language victory as I navigated the entire transaction in Spanish. The clerk noticed my effort and was relatively patient and encouraging.

One of the main cathedrals in Estella is San Pedro de la Rua. It was open so we ascended the steep steps (slowly) and went inside. Have a I mentioned that Spain has incredibly beautiful churches? A 12th century example of Romanesque architecture, San Pedro boasts ornate detail inside and a beautiful cloister along its north and west galleries. Catholic Churches of the Middle Ages served as social centers, spiritual centers, and often centers of protection for the populations they served. San Pedro’s east and south galleries disappeared in the destruction of the castle of Zalambort, originally built on the hillside above San Pedro.

We stayed in the old, central part of the city, passing by the Palace of the Kings of Navarre as well as walking through San Miguel. We quickly realized that we had little appetite for too much walking through the city streets and found ourselves sitting most of the day – in bars, parks, and churches. At this point, much of our conversation has centered on the physical challenges of our journey. Though we’ve seen many churches, our time in them has been primarily as tourists. Turning our minds and hearts from the discomforts has been a challenge. The urgent realities of our physical situations have superseded some the spiritual opportunities. Pausing to consider this, we commit to working to maintain perspective. However, both of us wonder what it will feel like tomorrow when we return to our shoes and put those packs on our backs.

That evening, we had dinner at Bar El Mundo – a curiously eclectic place that was clearly built to cater to pilgrims on the Camino. Sally and I both opted for the fried rice and vegetable dinner, Sally with a beer and me with wine. It tasted a bit like home. Also dining at El Mundo were Michael and Jay, our American friends from Orrison. They were moving at a similar pace to us and struggling with their own aches and pains. They told us that they had decided to use one of the luggage forwarding services and that is has made a huge difference for them. They found that they were struggling to cover the distances and when they got to the next village, they were too tired to even look around.

As I’ve become more intimate with the rigors of this adventure, I’ve found my view on the concept of bag forwarding softening a bit. It is not the Camino experience I want for myself but I understand why the service is in such demand. There are no less then seven or eight companies that provide the service for 4-5 euros per leg. It is clear that there would be far fewer pilgrims on the Camino without this support service in place. Most who use the service, start by saying they’ll use it for this one leg so they can recover their strength. However, like most crutches, it becomes hard to let go of it and most continue to use the service once they’ve started. The ultimate questions become, what is my end goal and can I reach that goal without the crutch? Do we lose a little part of ourselves when we call in that lifeline? I suspect I’ll be revisiting this question numerous times before our journey is done. Today, how I finish seems as important as finishing.

Note: As I write this, a young, robust-looking peregrino walks up beside my table and is busily attaching his forwarding tag to his backpack. I do not know what crosses he carries but I do see him laying one of them down today. 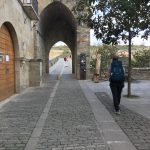 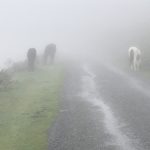 Those Who Need it MostUncategorized