We were able to do laundry at our albergue in Puenta la Reina. Since arriving in Spain on October 2, we’ve had access to a washing machine once and there was no dryer. Albergue Jakue has a washer and a dryer. Major luxury. Even having to wait our turn wasn’t a big deal – reminded me a little of college.

I’m now able to return to something resembling my morning schedule which revolves around writing. Though it is rare that anything is open before 7am, I am finding my way around it. Jakue has a bar that is open when I head upstairs. In Spain, a bar does serve alcohol, however, they also serve as coffee bars with breakfast sandwiches and pastries. Later in the day, they will offer pinchos and tapas options. A brief side note on pinchos and tapas, another subject touched upon in The Way, from linguaschools.com:

Anyway, I am happy to get my cafe con leche and work on my blog posts. Still a few days behind, I am making progress. Thanks to all who have asked, commented, and shared your support. It is nice to get your feedback.

As we start the trek toward Estella, everything is tender. Feet. Legs. Back. We realize that we will need to be sensitive to rest breaks, water, and more rest breaks. Leaving the albergue, we pass one of two churches in Puenta la Reina. The first, The Church of the Crucifixion, a church originally built under the auspices of the Knights Templar, it is beautiful in its sparseness. The name comes from the “Y” shaped crucifix inside. This church also has a striking sculpture representing Mary holding Christ after the crucifixion. The minimalist decor of this church is a stark contrast to the ornate cathedrals we’ve seen so far.

We leave the village over an impressive, six arch, medieval bridge for which the town is named. The bridge was built in the 12th century to provide a safe way for the growing number of pilgrims to cross the Arga. We take a moment to appreciate the bridge, the river, and the town, then cross and make our way into the countryside.

Moving through vineyards and fields with olive trees, we walk toward a medieval hilltop village called Cirauqui. The steep angles up into the village require us to move slowly. We are less than halfway into our day and are feeling every step. Two blisters have started to form on Sally’s foot and she moves gingerly through the village streets. The church is at the very top of the town but we opt to move through and minimize the additional climb. We’ve seen fewer pilgrims today – perhaps because of our late start. I have no blisters but my legs feel heavy on the steep inclines. Five days of walking on demanding terrain are taking their toll. We’ve only walked about 60 miles.

Along the way, we meet Jeremy, an American from California and Corinna, a young lady from Germany. She has injured her knee and is moving slowly herself. Both started in St. Jean and plan to go all the way to Santiago. We cross paths with them several times during the day as they are resting about as frequently as we are. We stop for lunch in Lorca, a small village just over halfway to Estella. The restaurant is filled with peregrinos – we immediately see Chris and Nora. We find two stools at the small bar and meet Jim, an American walking his 5th Camino. He has been in Lorca for several days dealing with a painful kidney stone. Everyone we encounter has a story. Everyone is carrying their own cross.

Today, we’ve moved through three hilltop villages and finally begin the descent toward Estella. One fact of the Camino seems to be that every approach to a town requires a climb up to it or descent down to it. A bit ahead of us, we can hear a loud and steady “whoosh” sound, a dull roar that we initially think is a waterfall. Rounding the bend on the hill, we find ourselves looking down on a grove of tall trees with brittle leaves still attached. The wind is blowing forcefully through the leaves creating the sound, which we seem to be able to feel as well as hear. Stopping for a moment, we close our eyes and let the wind and its voice push over and around us.

As we descend into the trees, we discover a river and cross a bridge heading toward Estella. Walking into the town, we pass the unused church of Santo Domingo and come to a high-arched bridge crossing the rio Ega. To our left, the Way turns into a narrow brick road running between old buildings with two albergues beckoning weary pilgrims. We have booked a room at the Hotel Chapitel and cross the steeply built bridge into the narrow streets on teh other side of the Ega. Getting to our hotel, we take our shoes off as quickly as possible, shower, and lay down for a nap.

We have dinner in the hotel bar and decide that it is time for a day of rest. Tomorrow, we’ll stay in Estella and do a bit of exploring – without backpacks. 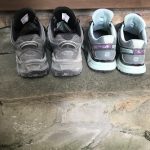