Yesterday was Sunday, right? It was one of the those days that, by the time we finished it, we found ourselves unsure if events from the morning were actually in the same day or not.

To stay on schedule, we decided to go a longer distance yesterday – nearly 29km. The profile of the day was a hike up the mountain, a walk across a plateau, and a descent on the other side. We knew it would be challenging but wanted to attack the climb with fresh legs.

The day started cool and rainy. We dressed warmly but were soon shedding layers as we got hot during the climb. The ascent began immediately as we walked out of Las Herrerias, starting on a road and then turning onto path into the forest on the mountainside. The “path” turned out to be a vertical creek bed with a rocky base. We climbed up this creek bed for an hour, working to keep our feet relatively dry as we navigated around water running down the mountain. It was quite arduous and we stopped frequently to catch our breath and rest our legs. We reached a town and considered stopping for a refreshment until I realized that we were only 1/3 of the way up the mountain.

From La Faba, we continued our climb up. We were still warm but it began to get colder as we climbed as the wind picked up. Even in the fog and rain, we were afforded amazing views of the valley below. However, they were hard earned. Halfway up the mountain was a small farm – it looked like a very tough existence. A few pilgrims passed us as we were slowly climbing. As we passed into Galicia and approached the summit, we turned around to survey the climb and saw a peregrino getting out of a taxi along the roadway about 300 meters behind us. Probably a good decision. We arrived at O’Cebreiro at Noon – it took us three hours to climb nearly 1800 feet over about 5.5 miles.

We stopped at a cafe in O’Cebreiro to rest and drink something warm. Oxana had just arrived, had a table in the crowded bar, and asked us to join her. The town was full of week-enders milling about. An old church sat at its center. The bar of was full with a mix of week-end visitors and pilgrims who had just scaled the mountain. We recognized almost all of them: Chantal and Norbert walked-in (Mes amies Francaise!), we saw the Chines mother-daughter team, and some of our Korean pals. Oxana stayed in Las Herrerias last night and was wearing a pair of suede-looking sneakerS with plastic hanging out of them. She had been walking in sandals because her original hiking boots hurt her feet and improvised with the dress-sneakers due to the creek-walk on the mountain. She said the plastic wasn’t keeping her feet dry but they were warm. Wow!

We were headed to the same destination so we decided to walk with Oxana today. We didn’t realize it at the time, but it would be another 7 hours before we reached our hotel in Triacastela.

As we left O’Cebereiro, we bundled up and learned into the wind and rain. It never stopped. We walked-on, distracting ourselves by talking and always pressing forward. The “plateau” which looked to be pretty flat on the topography map actually undulated several times, resulting in some additional climbs that were quite steep. Visibility was difficult as the wind was blowing the rain sideways forcing us to hold our ponchos down. As we passed the statue of San Roque, he appeared to be fighting the same elements as he pushed toward Santiago.

We passed through a couple of small villages that had nowhere to stop. The entire journey comprised of tree-lined paths and the occasional passing of a homestead or tiny village. Our guidebook was far more generous to the stops along this way as their reality was quite limited. In Hospital de la Condesa, we passed the pre-Romanesque Iglesia San Juan built in the 11th century. It was dedicated to San Roque but was closed today. Most everything was closed today.

Along the way, we had lots of time to get to know Oxana. Married for nearly 20 years to her Russian-born husband and physicist, Vladimir, they live with their son George in the heart of London. Oxana completed her undergraduate degree in Moscow and earned her MBA in London. Oxana and Vladimir were married in Venice and George was born in Barcelona. All three of them speak Russian, English, and Spanish – Vladimir also speaks German. Talk about an international family!

Oxana has never done any hiking to speak of and really made the decision to do the Camino at the last minute as she had a window of time during a job transition. Her equipment was bought just before she left – one of the reasons for her issues with her original boots as they were not properly broken-in. She has a very kind and open heart toward her fellow peregrinos. When I shared the story of the Irish making fun of busloads of touristinos (another word I created to describe tourists busing around the Camino) she was a kind defender-of-the-meek and exhibited the properly open-hearted pilgrim attitude toward all. Oxana is Russian Orthodox Christian and, though she is not particularly active in her church, she is drawn to the beauty and history of the churches and shrines along the Camino. As we walked, I think I remembered seeing her walk into a Mass we were attending in Burgos. That seems like years go now.

We’ve only walked any distance along the Way with three people, Denise, Hans, and Oxana – all lovely individuals. One of the things that made our journey with Oxana work was her sense of humor – she loves to laugh, even occasionally at some of my irreverent comments.

By a little after 3pm, we had made it to Fonfria – still nearly 10km from Triacastela. We ate omelettes and cheese, drank a coke and a cafe con leche, and finished with a Twix to make sure we were properly fueled for the descent. We stayed for quite a while to dry ourselves, and our gear, before heading back out.

Moving out into the wind and the rain, we climbed a bit more and then turned off of the road and onto a path and our descent. We passed another farm and the wind began to get stronger, blowing our ponchos every which way and rain into our faces. Passing under some power lines, the wind began to howl, literally as it tore across the mountainside and the lines themselves. Coming to a bend in the path, we could hear the wind roaring – it sounded like a freight train and was frighteningly reminiscent of tornado indications back home. The wind was still blowing had but became ferocious as we rounded the bend. Sleet began to fall as we pressed onward toward the point where the path turned downward again. There was no place for cover, we just had to keep walking. I bundled up in my poncho and thought of my post earlier in the day when I wrote of the “whisper” coming on the wind or in the rain drops. I smiled and thought of Lt. Dan in Forrest Gump, screaming at God in the midst of a hurricane: “Is that all you’ve got!” For my part, I issued no challenges and kept my head down as we fought through the wind.

The wind did not blow us off of the mountain but it did remain our companion all the way down. We passed several more farms during our descent and walked through a muddy last mile under imposing trees and past dark barns with falling roofs. Right at the edge of Triacastela, we came to a tree, rumored to be 800 years old, that looked unnervingly similar to the tree in the movie Sleepy Hollow from which the headless horsemen emerges every night.

We survived our 32km day – 10 hours between start and finish, checked into our hotel (lovely place!) and found a restaurant for dinner. The crew from the Vieira was at a table (Boys from Holland, Shel, Alex, and Marta) nearby and we were joined by Oxana. A change of pace last night with grilled salmon. We are now in Galicia, known for seafood and apparently, wind and rain.

Today, on to Sarria and the last 100km of the Camino. 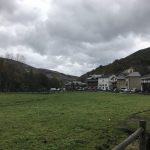 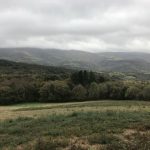