Yesterday was a wonderful recovery from the day before. We planned for a 12-13 mile day so we knew we could be a bit more leisurely in the morning. The Parador served up a great breakfast and we were out the door by 9am. Villafranca del Bierzo is a beautifully medieval town built on the hillside with narrow, winding streets and a climb up or down to get just about anywhere. We wound through town and crossed over the Rio Burba and then followed the Rio Valcarce out of town, walking along it for the entirety of today’s leg of the Camino.

The vineyards of Bierzo we walked through to get to Villafranca gave way to heavily wooded, mountainous terrain. Our path was alongside a road today and up above the river below. Fortunately, the road wasn’t too busy and we were safely behind a concrete buffer most of the day. Today’s path was interesting as it followed the river and wound between two major interstates running across massive spans overhead. Early on, we could hear some of the traffic above but by the time we reached Las Herrerias, the spans were so high we could no longer hear the traffic.

Early in our walk today, we came across Julia and Kayla. Julia ran over and gave Sally a hug – she was particularly happy to see that we had joined the Camino hat club. They both looked like they were doing well and we talked for a few minutes and posed for a couple of photos. Julia told us how she walked a few extra miles yesterday when she got lost. We’ve heard similar stories from other pilgrims and, fortunately, have been able to avoid a similar situation so far. We watched them walk off – Julia still favoring her knew and Kayla with a wrap on her sore ankle. No one walks without something hurting. They are both part of our Camino family now.

We stopped for a cafe con leche in a village called Trabadelo. Oxana was outside on the phone and joined us after her call. Apparently, her son’s tennis lessons were canceled in London today due to the weather – she laughed as she quipped that one would never get their lessons if they canceled them every time it rained in London. We sat in the cafe for about an hour talking about the arduous day before and the creepy town we detoured through. She said she came across a French peregrino who was in a panic after walking nearly 40km yesterday and getting lost near that village, Valtuille de Arriba. Apparently, he couldn’t find an albergue with open beds in the town before and was hitting a point of exhaustion. She also told us of running into a friend in the last village who had been ravaged by bed bugs – they got into her sleeping bag and she had bites over a large portion of her body. We’ve felt itchy ever since. As we get near to Santiago, lodging is becoming a bit of an issue as we’re seeing more pilgrims and places are starting to close for winter. We are now making daily distance decisions based on getting the right kind of lodging and avoiding stories like the ones above.

We had some rain yesterday but it was pretty light and did not lessen the joy of our walk. We actually came across a woman pushing her stroller and remembered we had seen her when we left Rabanal! It looked like her dad and an older daughter were walking with her but she was definitely the first peregrino we’d seen with a stroller and a baby.

We walked through a number of small villages as the road followed the river through the forested mountainside. We were walking along the valley floor and had great views of mountains on all sides as well as cattle grazing and the quaint buildings in each town. We saw few pilgrims during the second half of our day but did notice a few who appeared to be having trouble finding beds. Last night, I plotted the remainder of our trip and booked rooms from here to Santiago.

As the last village before the 6 mile climb up to O’Cebreiro and into Galicia, Las Herrerias numerous albergues and quite a bit of pilgrim activity. It sits on the valley floor right along the river with pastures not the backside of the one street and line of buildings. We found Casa do Ferreiro towards the far end of the village and noticed horses tied up just past our hostel. For about $40, they take pilgrims up to O’Cebreiro on horseback. Hmmm.

Casa do Ferreiro has about six rooms on three floors above a very small bar/restaurant. The building is completely stone with modern updates in the rooms. The bar is rustic but warm and comfortable. It’s seven foot ceiling lends to the coziness with exposed timber beams and stone walls. We spent the evening in the bar and saw no pilgrims. We did however see a few locals come through to talk to Maria (our hospitalera) and have a drink. A popular Spanish drink is a grape brandy called Orujo and it is typically served as a shot before or after a meal. An old man walked in to get his Orujo and was joined by a couple of other guys drinking beer and an espresso. He talked to us but I was hopelessly lost trying to follow him – too bad. One of the younger gentlemen (relatively speaking) had a big German shepherd waiting for him outside who would intermittently open the door to the bar and poke his nose in. The man stayed in the bar for the entire time we were there, drinking Mahou beer and playing some kind of casino game on his phone. He was missing a front tooth but had a great smile and described his dog as his “best friend.” I suspect he was sweet on Maria.

It rained all night and there is more rain in the forecast. We have a long day planned today to get up and down the mountain and are hoping to get some breaks in the rain. I woke up this morning and laid in bed for about an hour before coming down to a common area on the first floor. We had our window open all night – every place we’ve stayed has had these great windows that will swing completely open or tilt-in, providing great indirect airflow into the room. Laying there this morning, I could hear the steady rain and the wind blowing gently, then picking, then dying down again. There were several breaks in the rain and a few birds stirred, calling into the darkness. The cows moving with their cowbells had gone silent late last night but I could hear the steady fall of water from the river nearby. The darkness pushed all of my focus onto the sounds of the morning. No cars. No voices. Nothing to look at.

When did you last lay in the darkness and listen? I have made a point to not get up before 6am which has given me time like this every morning. Out here, the sounds are magical. Even as I write this, the drip of rain drops falls across roof and stoop. The river is moving steadily not far away and all else is silent. Sometimes, there is a quiet whisper carried in the silence, something so soft we miss it. I think of JC’s (that fast moving pilgrim from Switzerland) comment a couple of weeks ago when he talked of emptying himself and thinking of nothing. In as much as the Camino seems to be about seeking, I think it may be more about being found. More importantly, emptying ourselves in a way that allows us to be found. There may be some who have a “burning bush” moment. For the rest of us, I think His voice comes in a whisper, carried in a rain drop or lightly upon the wind. We have to be in a place where it can find us – emptied to a point where we have room to receive. 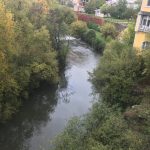 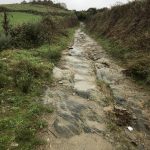