The senda turned west, running along a small creek and then disappearing up an ascent into the trees. The tall Spruce’s pressed-in upon the path, filtering the limited sunlight and bringing an even greater stillness to our journey. Silence. We noticed it early and even our footsteps seemed deadened in this quiet place. In Foncebadon, some villagers had told us of the “campanas de viento” – a Maragato legend involving strange wind chimes that are associated with the massacre of a small village during the Christian “reconquista” of the 8th century. The Maragatos are the last descendants of the Moors in the mountains of Leon.

The air was heavy with mist from the deep fog and we were tired from a day of climbing the mountain. We thought we could push to Ponferrada but the climb was steeper than we expected and fog brought an early darkness that made the steep, rocky path even more treacherous. We had seen no other pilgrims for hours and had lost our cell signal as we approached the 5000 foot summit. The light rain glistened heavily on the pine needles but it was the silence that weighed on us. It was then that we first heard them, softly at first – very lightly on the breeze. Then they became louder and more distinct. The wind kicked up a bit more and the chimes became clear. First a single set, then another, and another. At first melodic, their tone became shrill as other chimes joined, building to a subdued caucophany. Discordant and hauntingly alarming, the chorus stopped us in our tracks. Still more disconcerting, the initially stationary chimes began to move, further, then closer. We quickened our pace up the narrow path.

Coming to a bend in the path, an old wire fence wound along the edge of the trees. Placed within the wire squares forming the fence, were crosses made from sticks – hundreds of them of all shapes and sizes. The contorted limbs and twists of the crossed branches, sticks, and twigs gave them an eerie, gnarled appearance and I felt the hair stand up on the back of my neck. The air suddenly seemed colder and the chimes had stopped. The fence ran along the path, disappearing in the mist ahead. Then we saw it, a dark misshapen form off to the left – barely visible in the fog but resting in a clearing. As we moved toward it, the chimes reappeared behind us…

Yesterday was a good day as we began our trek toward Rabanal del Camino. We started with breakfast at our hotel where we met Oxana, another peregrino making her way toward Santiago. First meeting but we did exchange names.

Rain was in the forecast so we dressed for the occasion but only saw light misting as we got underway. Passing the first village out of Astorga, we came upon Hans adjusting his rain gear. We walked with Hans for the rest of the morning until taking a break in El Granon. Our free range conversation wandered from bed bugs to Spanish food as we learned more about Hans and his experience along the Camino. He had stayed a couple of days in Leon to meet up with some friends he had made early on the Way. He had also slowed his pace a bit at he tried to line up timing of his arrival on Santiago with the wedding he was attending after the Camino. He had also had some interesting encounters in Astorga, including the operator of a creepy albergue who sounded vaguely like Ramon from the movie, The Way. He had also had a drunk local get in his face at breakfast asking for money – I wondered if it was our friend from the laundromat. The rain picked up as we approached El Granon for a break. Hans left us there, determined to make it to the other side of the mountain today.

In El Granon, we saw Julia and Kayla as well as Bert and Rudy. Everyone was staying in Rabanal tonight. We also ran into Oxana again and discovered that she is from London. Remember Diane and Zee? They had mentioned meeting Oxana when we had dinner with them. One of the interesting side elements of the Camino is how one becomes aware of others walking it before actually meeting them. I guess it is a bit like reputation back home and, fortunately, most commentary is pretty positive on others out here. Before leaving, we met a couple of guys from South Carolina but won’t bother getting their names unless we see them again. Phase 2 of Camino protocol.

Our prayers were answered and the rain pretty much held off all day. We removed the rain gear and had a comfortable walk to Rabanal. Our legs were definitely getting tired after the steady incline all day and, of course, there was a climb into the village where our Posada was located at the far end of the town. I’ve gotten quite adept at booking us in places at the far end of the towns we visit which makes going in a bit longer and leaving a bit shorter. We checked-in to Posada de Gaspar and guess who else was staying there? Bert and Rudy. In fact, they must be in the room next to us because I awoke to them talking and getting ready for their day at 5:30am. Perhaps they wanted to walk in the dark today – the restaurant won’t open until 8am.

We sat with Rudy for about 2 hours before dinner yesterday. He was kind a enough to buy our beers. We talked casually about people he’s met along the Way, his freelance photography business, and his love of his brother’s dogs. Rudy is the Camino maven. He not only talks to everyone he encounters but is also in contact with many via text or social media as he moves town to town. Sally calls him the “Kevin Bacon” of the Camino – everyone seems to have six degrees (or less) of separation from him. He wondered out loud if he could meet a nice girl at church – LA girls are just so shallow. You never know until you try! We saw Bert and Rudy again at dinner but the posada was otherwise empty.

We have now made our travel arrangements to get back to Indiana. We are shortening our overall stay by a few days so we can get home and reacclimate before starting back to work. If we follow the schedule in the guidebook, we will be in Santiago in 10 days. We are not planning any additional rest days and will fly out of Santiago on November 13. Rudy told us last night that he is not ready to head home. We continue to realize how much we love the life we have at home.

Someone asked me if I have been able to disconnect from work obligations. Yes. More than I thought possible. The key for me as been my team who have cast a wide net to catch things and have done a phenomenal job of keeping momentum going while I’m away. The second secret was to turn off notifications on my phone. I have an international travel plan in place and can call and text as I normally would. However, I don’t have notifications interrupting me and that has made a huge difference. I check-in periodically but it is during downtime in my day and is on my schedule.

We will miss the trick-or-treaters today but will be thinking of everyone back home and hoping for a safe and happy Halloween. On to Molineseca! 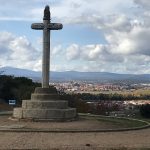 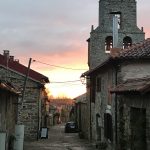