For Those We Love

Yesterday morning at the Albergue Vieira was pandemonium as the bell was rung for breakfast. Peregrinos filled the tables as the sound of five languages, glasses clinking, and silverware hitting plates echoed through the room. Camino summer camp was on full display! We were late to the party so we ended up at our own table facing towards the pilgrims dining at the long tables. Alex and Rudy decided we must be royalty as we sat surveying the room. I told them we bought the Royal American package offered by the albergue 🙂

The day was foggy and damp in the morning – a harbinger of what we anticipated as we head into the Montes de Leon tomorrow. We were the last to leave the albergue and had a quiet walk to ourselves for the first 10km where the senda finally diverged from the busy highway and the scenery became pastoral once again. The Puente de Orbigo is one of the longest and best preserved medieval bridges in Spain and dates from the 13th century. Don Suero de Quinones, scorned by a beautiful lady, three down his gauntlet to any knight seeking to pass the bridge as he worked to recover his honor. Apparently he was able to win the required 300 lances and recover his honor, then he proceeded to Santiago to give thanks. The rumor is that this episode inspired Cervantes Don Quixote.

After the bridge, we passed through Hospital de Orbigo, a larger village with many options for lodging – many of which are now closed for the season. There is a large festival here celebrating the story above and the village feels a bit like a summer town. As we were heading out of the town, we came upon the French couple we had now seen for at least a week at various stops. I knew they spoke zero English but was determined to get their names so I dusted off my French and jumped-in. Their names are Chantal and Norbert. I was able to determine that they are enjoying their trip, that their next stop is Astorga, and that they felt it was a lovely, and warm day. Small victory.

We passed our Irish friends in the next village – they seemed quite pleased to see us and the villagers were likely startled by the ruckus. They caught up to us in the next town where I was able to get a snapshot and an Irish flag that I am now carrying on my backpack. They declared me a “man of Ireland” and all of the honors that entails. Astorga is their last stop before heading home. They will finish their last segment of the Camino next year.

The next few hours was a walk through the countryside along farm roads, through trees losing their leaves, and among brushland reminiscent of the American southwest. The soil was red and though we occasionally saw a left over puddle from previous rains, everything seemed quite dry. The terrain was also quite hilly as we climbed and descended four or five times before reaching San Justo de la Vega on the outskirts of Astorga. Heading down a steep descent, we could see Astorga’s massive cathedral, now about 4km away.

As we climbed in Astorga, our Irish friends caught us. We learned why Guinness is not the same everywhere (it’s the water which is much fresher in Dublin where is brewed). My friend, Bobby, walked with us for a bit and Martin affirmed our status as “Friends of Ireland.” As we arrived in Astorga, Bobby confided to me that he was glad this was their last stop because he wasn’t sure he could go any further. Bobby is a wiry, healthy looking guy and his admission surprised me: both because I think he could absolutely finish but also because I wouldn’t have thought his pride would allow such an admission. He asked me my age and shared that he was mid-50’s. Then he offered me some wisdom his dad had passed to him: “Remember Phil, if you ever think that something small can’t make a difference, you’ve never spent the night in a room with a mosquito.” Totally Irish and totally endearing. I will miss my Irish friends.

Getting into Astorga, we were tired and getting impatient. We realized that we had not eaten much today and the terrain was more challenging than we had seen for some days. Earlier in the day, Astorga held some kind of festival and we walked through the aftermath in the main city plaza – paper and debris was scattered everywhere. The city itself has a population of about 12,0000 which makes it pretty large for a town that still holds much of its Roman and medieval history. We got checked-in to our hotel and quickly found a place to eat – pizza was the answer.

Afterward, we made our way to the Cathedral – massive and beautiful. The 15th century Gothic Cathedral blends Romanesque and Gothic styles and has a beautiful collection of Roccoco and Baroque era altarpieces. We followed the audio tour but our legs and our brains were fading quickly by the time we finished. We decided not to tour the stunning Gaudi-designed Bishop’s Palace – unfortunate as it looked to be an amazing place as well. We needed to get laundry done and were going to need to eat dinner as well.

We went to a city laundromat just around the corner from the hotel. I was in shorts, sandals, and my Northwind jacket – all other clothing was now being washed. The laundromat was tiny brightly lit, three wall mount washers and two wall mounted dryers. We sat there checking email and planning the next day’s leg when a man walks in quickly and begins talking rapidly. I was sitting on a low window ledge and looked up at him. He was thin, with sharp features, and a weatherworn face. No beard but unshaven, his hair was buzz cut and he wore blue jeans with a plaid flannel shirt tucked-in. His boots were hikers and for a moment, I thought he was a pilgrim in need of help. I looked into his eyes – they were blue-green and wild, a bit desperate. I told him that I did not understand what he was saying, “Anglish?Anglish?” he said as he tried to smile. “Euros. I need Euros. You give me some Euros?” I smiled and said “no.” I saw Sally out of the corner of my eye, she had moved away and was standing to my right, towards a corner – I could feel her fear. He kept going and began motioning with his hands, as if he was bringing food to his mouth – “Eat, eat. You give Euros to eat.” I said “no” again and he got a bit more agitated. At this point, I stood up, stepped closer to him, and said “NO. I am not giving you any money.” He backed away, bowed a bit and shook his head. “K. K.” He started to walk away, then changed his mind and turned around, “You pilgrim? Welcome Astorga.” Then he broke into a very aggressive tirade in Spanish which focused on my poor qualities as a pilgrim among what I can only assume were a series of expletives. At this point, my smile, and my good will, were gone – I simply stared at him and braced myself for whatever was next. He walked out.

We saw him walk into a shop across the street and begin the same routine. We heard a couple of “no’s” and then the shopkeepers voice got loud and he left. A few minutes later, we saw a police officer, on foot, turn the corner and head in the man’s direction – followed shortly by a police vehicle. Thinking back about our entrance into the town, we had noticed many police officers walking about – something we hadn’t noticed in other towns. I had figured it was because of their festival.

For Those We Love

As we finished the evening, the encounter with the man was on my mind and heart. We have seen beggars along the Way, often near churches or outside of shops. We have not seen anyone get aggressive. We have given money to many as we’ve walked and feel that we are called to see Christ in everyone we encounter. As I considered the confrontation, I realized that, we are also called to protect those who may be in danger from the evils of this world. In that moment, I was reminded that there is nothing I wouldn’t do to protect Sally. Sometimes, we are called to a manhood that requires something different from us.

Last night, we talked to our youngest, Macy, via FaceTime. She seemed well and was getting ready for her next class at Bradley University. She quipped, “When are you coming home, you’ve been gone forever.” I smiled as I thought that we probably wouldn’t have seen her in this same time span if we were at home. Sometimes, it’s just knowing that mom and dad are accessible.

Today, we head into the mountains. We have 11 days until we arrive in Santiago. It seems like a long time but we now know it’s not. Though we know they’ll be challenging, we are looking forward to the mountains and the change they promise. 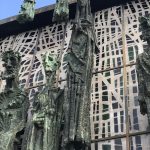 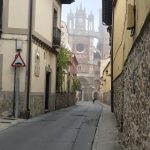