The First Fortnight on the Way of St. James

I sit in a very comfortable hotel in Burgos and am thankful for the creature comforts I have been missing. These first two weeks have been strict, hard lessons, in physical demands and a huge detachment from life comforts.

The physical demands include the rigor of the path we are following.  To this point, everyday has had some extraneous things to battle. The steep inclines from St Jean-Pied-de-Port that I managed in 50 foot increments followed by a break to catch my breath and rest the muscles working at that steepness. This intense incline lasted the entire 8 km to Orisson and i feared would last our entire Way. The inclines following have been challenging but that first 8 km set the tone for the physical rigor I anticipated but ignored prior to the start. I felt excitement at times of decline in the path but soon realized these were strenuous and challenging in a different way.  There has been rain as well as some 20+ mph winds that we have walked head-on into. The wind added a new challenge for inclines as well as the long straightaways that we thought would be more like just a walk in the neighborhood!

My body is impacted with sore muscles, fatigued shoulders, foot aches and strains and a major blister on my little toe! The gift is that most of the aches, tightness, and tiredness are gone in the morning just enough so you think you can do it again. I fought the blister battle with Compeed and it took almost 10 days to mostly heal! I am encouraged as I look at it this morning and the beautiful new skin that is forming. Hopefully that battle is won.

Detachment has been difficult too. I miss my family: seeing them and hearing their voices. I miss FaceTime with them and calling my mom. I miss coffee in my kitchen, cooking a tasty meal, my bed, and of course my bathtub! We have experienced paper sheets, coin operated showers, the same meal repeated and a coffee that is just not like ours. I long for buttered toast and eggs, for the restaurants we visit frequently, and spaghetti from home! It is very clear to see the gifts of my life from here as I miss them in my soul at this moment.

Catholicism on the way has been interesting. We have met very few Catholics on this historically Catholic pilgrimage we are on.  The first night in Roncesvalles, the Pilgrim’s Mass was full. It was very odd to follow the routine of the mass but understand none of the language. I’m glad Father Mike (www.bulldogcatholic.com) told me that doesn’t matter, the graces and the sacraments have the same power for you and in you! Pilgrim Masses since that night have been sparsely attended. I have noted that those from Korea are usually catholic and take the time to prioritize the Mass. Many of the pilgrims easily speak about finding spirituality but are very clear that it is not religious. The last Mass, at San Juan de Ortega was a change. Even though the priest’s homily was in Spanish, I felt in my heart I could understand what he was conveying! It gave me chills.

Growth of the mind and heart are also occurring during this Way.  Although the conditions are not perfect, God has provided. We encounter the genius of creation daily and appreciate what it is. We encounter individuals that are precious just by the fact that God created them and they all bring a value and worth. We have seen extreme hospitality by a few of our innkeepers that is so impressive. The heart and soul they put into supporting all the pilgrims, day in and day out, is amazing!

We encountered a lady in Pamplona who was about to start her second Camino. She said the first third is about the physical demands, the second third was mental, and the  last third is celebrating as the journey nears its end. Her words gave me hope to continue on! We shall see what the next fortnight holds! 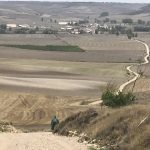 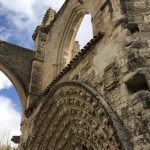