The Art of Emptying

Our Casa Rural was as full of life yesterday morning as the night before. I was able to enjoy some quiet time to think and write before our housemates began their days. First to join me was Jonathan Christophe (JC) from Switzerland. We talked of aching joints and daily distances (the normal starting point for a Camino conversation) as we made coffee and prepared breakfast in the little galley kitchen. They had an automatic coffee maker and I found a jar of Nescafé – not exactly cafe con leche but I improvised.

JC and I moved into the family room/dining area and ate our breakfast. He started his Camino in Geneva and has already been walking for four weeks. He has the lean figure of one who has been walking for weeks. Dressed in his gear, he looked like he might be heading out for Alpine skiing – another sport he enjoyed. He said he started his trek going between 35 and 40 kilometers per day – a scorching pace. He ended up with tendonitis and downshifted to 25 km/day for about 10 days as he recovered. He is now moving at a more comfortable 30 km/day and plans to be in Santiago on November 3 – a week before us.

Sally joined us and then our new friend, Sven, from Germany. We discovered that JC had just retired from what sounded like a very successful career as an HR exec with some of the world’s biggest companies. The driven nature of his career mirrored the Camino pace he described. He had secured a couple of board appointments and effectively entered an early retirement at the ripe old age of 55. Unusually, he and his wife had four children and he smiled, wondering aloud how they would deal with him being around more.

Sven worked a seasonal job and was essentially off for the next 10 weeks. He planned to meet his parents in Lisbon, Portugal for holiday after he completed his Camino in Santiago. Sven and his parents live in Potsdam. Our conversation wandered widely as we discussed Spanish cooking, smoking in Europe, and obesity in the United States. Both of them spoke fluently in English so it was easy to communicate. The conversation took an interesting turn when we turned to the Camino itself. JC mentioned that his son asked what he could possibly be thinking about all day as he walked miles and mile? JC said that he thought about it for a minute and realized that he normally thought about nothing – his mind was emptied when he walked.

As he spoke, it occurred to me that the emptying process is one of the major steps in the process of detachment – leaving it “all” behind. For JC, his trek across Europe wasn’t necessarily about finding anything, it was breaking away from a 30 year corporate career and emptying himself of that previous existence so that he might start again. Sally and I are not walking alone most of the day but we have stretches of silence. My mind tends to wander broadly but there are moments of nothingness – just being. It is raw and elemental.

Yesterday’s weather was cloudy and cool, but dry and mostly windless. The layers with which we started the day were soon peeled as the windless and rainless 45 degrees almost felt balmy. Except for several stretches of extreme mud on our road, our second day of the Meseta was mostly challenge-free. Our first stop was Hontanas, a town that many pilgrims walked the extra 10km the day before to reach. It was totally geared for the peregrino and the cafe/albergue at which we stopped had a massive expansion being built on its backside – they were even adding a pool!

Stopping for a proper cafe con leche and a delicious empanada, we saw numerous familiar faces: Sven was outside, Eddy (a Scotsman we met the day before) and Julia and Kayla (young Americans who work for a youth missions organization) were there. When we saw Julia, there were tears in her eyes. As she stood to move around the cafe, she walked stiffly with a knee that was clearly not cooperating. Pain and frustration were written across her face. She was debating whether to try to make it to Castrojeriz or to stay in Hontanas.

Every pilgrim is fighting some kind of physician discomfort. Everyone. Tendons, knees, feet, blisters, muscles – we have not met anyone who does not have a challenge of some sort. Sitting outside, Sven was having the same debate – stay or go on? His leg and back had been hurting and he had dialed his days back to 10km to help them heal. Finishing our empanadas, we checked our feet, rubbed our muscles, and walked on.

Moving out of Hontanas, the path climbed onto a hillside and wound its way through and around rocky fields. We were above the road and small creek below as we walked along and it provided a wonderful vantage point. The winding water source below us was lined with large, full trees. The windswept hill above us was dotted with small conifers that looked a little like Charlie Brown Christmas trees. Sally and I talked of the Inklings as we walked. Bishop Robert Barron had recently done a brief video at the graveside of J.R.R. Tolkien and talked about Tolkien’s powerful collaboration with C.S. Lewis and other in their literary group. The two friends were well known for taking walks across the English countryside and it struck me how inspiring those times must have been for their creative energies – walking out and rubbing up agains life.

As we talked, Kayla walked past us – Julia decided to bus or taxi ahead to Castrojeriz to give her knee time to heal. Smart decision.

Nearly 6km along, we saw some ruins in the distance which we determined were from San Anton, a former convent. As we turned the corner, we heard what sounded like Irish music and found a little roadside cafe nestled in what looked like another set of ruins across the road from the old convent. As we walked in, we were greeted by Angel, a 60ish gentleman with a vest on that was full of pins and patches – many of the larger ones looked like American military ones.

Angel and his dog, Shari, lived in this spot and ran the little cafe – which he had built himself. He brought us a Coke as well as some pinchos (for which we had not asked). He was completely charming. We learned that three years ago, he came out to run the stand for 3 months and he never left. The music he was playing was the work of James Kline, an American artist who had passed through and was known for a custom made guitar that was quite unique – he showed the CD cover. Angel mentioned that it was just him, his dog, and his poetry out here at San Anton. I told him that Sally loved poetry and asked him to share something; he walked over to her and recited a piece – I’m not sure if he made it up as he went or not, but it was lovely. His English was charmingly broken but he could communicate pretty well. He smiled as he told us that his ex-wife could not stay away from other men but that his best friend, Shari, had never wandered. “She is 14,” he said as his face got serious, “and my eyes will be rivers when she goes.”

Sven joined us a bit later though Angel’s style seemed to make him a bit uncomfortable. He was joyfully exuberant and his little place and the pilgrims who stopped in seemed to have brought him peace. He told us that his other interest were his fields of truffles – he claimed to have thousands of plants growing somewhere nearby. Perhaps. We walked away from Angel changed in some small way. Sometimes you find people in exactly the place they are supposed to be.

Leaving Angel’s oasis, we walked for a bit with Sven. He shared that he had just learned that a friend that he had made early on his Camino had returned home. He was sad because he had looked forward to seeing him again in Santiago. Apparently, the peregrino had started walking in Paris and it had been a trail of woes. He was almost 40 days in and a bout of the flu put him over the top. Sven was upset by this and saddened that he would not see his friend again. He talked about the hundreds of people he looked forward to seeing again when he reached Santiago.

As I considered his words, I realized that, in this sense, the Camino was a metaphor for life and our quest for Heaven. The people we meet. The challenges we face. The things we learn. All the while, we move toward a destination – a point of arrival. In that place, we join all of those we’ve loved along the way. When we first spoke, Sven rejected any notion of the religious in his Camino but perhaps his longing for reunion speaks to something deeper. Something to contemplate along the Way. 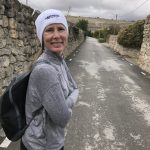 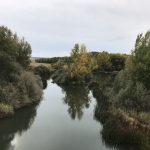