The Hotel La Henera in San Juan de Ortega had a common area on the first floor with a machine that dispensed coffee for a dime. Unfortunately, it tasted like the beans had been scorched rather than roasted – nothing a couple of packs of sugar couldn’t reconcile. I was up at 5am and wrestled with slow WiFi, scorched coffee, and an irritatingly insensitive sensor on the motion activated lights in the dining room for the next couple of hours. If one had been standing outside of the hotel, they would have seen the lights going on and off half every 2.5 minutes for the duration of morning. At one point, I found myself laughing out loud – It was all I could do as I waited for the next page to load.

As the morning’s pilgrims rolled through for their cup of scorched refreshment, I had the opportunity to catch up with some familiar faces. Craig from Seattle and Bavin from Hamburg were the first to show. Craig, a retired sailor was on his fifth Camino. Bavin was joining him during her 3 week holiday. Interestingly (or perhaps not), Bavin was only the second person I have encountered on the Camino who asked me what I did for a living. She works for a French chemical company selling lubricants for airplanes. They met at the tail-end of Craig’s last Camino. I imagined Craig, about 3 inches shorter than Bavin, in a big raincoat and one of those skull caps one might see on a grizzled sailor in a movie. He had a nicely trimmed white beard and his eyes sparkled. He clearly had the Camino bug and a fire for getting out on the trail. I asked him “Why Camino?” He quickly answered: “The Camino is life made simple. You eat You sleep. You walk. You meet interesting people. I am doing a Camino in the spring and one in the fall and plan to keep walking it for as long as I can. I love the lifestyle.”

Next up were Bert and Rudy. Two Asian gentlemen we had seen off and on along the Way. We were never in proximity to speak until the night before when Rudy asked us in strikingly Southern California speak if we were Americans. We had encountered numerous Chinese, Malaysian, Korean, and Japanese pilgrims and had not heard these two speak. I smiled at my assumption of their nationalities and felt grateful that our great melting pot accommodated such diversity – something I have realized is more unusual in other places. Rudy was very chatty this morning and his style was immediately endearing. He was on Camino with his uncle Bert who had done it 7 years ago. Bert, I learned, owned an investment firm in Palo Alto and his son (who, according to Rudy, is very intelligent and capable) was managing it in his absence. Rudy was quick to ask me what I was doing as I sat there typing away and I told him about my blog. He immediately wanted to know the web address – the first person on this Camino to ask or know that I was blogging about it. Rudy, if you read this, let me know and dinner is on me when we next cross paths. I realized after they left that Rudy told me about everything except himself. Another thing we will correct when our paths next cross.

We set out from San Juan de Ortega in the quiet, cloudy morning. I was grumpy after spending the morning fighting with WiFi that must have connected through a 90’s era 2400 baud modem. First world problems. Sally bore my mood patiently as we made our way up and through forest into pasture and amazingly close proximity to cows grazing. We heard them from a distance as Spanish herders are very good about keeping cow bells on their animals. The sound has become familiar and is always a bit alarming when you hear it but can’t yet see the animal. These cows have horns intact and are in no way shy as pilgrims walk through their pasture. Sally found it unnerving and we pressed through at a good clip. At one point, one of them angled over toward us and stepped onto the road behind us. We watched her carefully and I did feel a pang of vulnerability when I considered the fact that if she became irritated for some reason, there was no where to run, and quite frankly, neither of us would be able to muster much speed. She moseyed along behind us and we were soon out of the pasture and moving down toward Ages and our first stop of the day.

In Ages, we stepped into a quaint cafe called, The Alchemist, and run by a husband and wife team. The place was spotless and the food outstanding. By far the best of its kind we had encountered. We enjoyed the standard tortilla patata (potato omelette) but she garnished it with fresh tomatoes, a pepper, and olive oil that seemed made to pair with the tortilla. We were counseled to try this and the home made cake by Arianna, a young California woman sitting in the corner. Cows, breakfast, and good coffee helped salvage my mood. However, the real savior was a sophomoric moment when Sally pointed out a curiously out-of-place tiki statue with a single outsized feature that could only represent homage to the Samoan god of fertility or possibly John Holmes for any who might recognize such a crass reference. Julia, Kayla, and Lindy (American girls with day jobs as missionaries who were vacationing on the Camino) showed up a few minutes later. We left full and energized for our push to Burgos.

The day remained cool and comfortable. We climbed through rocky fields – actually, it looked like rocks with some field spread over it – to a summit plateau that gave us a complete view over Burgos in the distance.  A large group of Spanish students, seemingly on a field trip, were gathered around a cross (Cruz de Matagrande Punto de Vista) at the 1080 meter high point. We passed our friends, Claudia and Jeronimo, and moved through a large herd of sheep as we started down the other side. There were several options to approaching Burgos and we worked toward the one that had a less suburban approach making our way toward the city via a couple of villages and then a path following alongside the Rio Arlanzón into downtown Burgos.

Moving out of the countryside, we encountered fields of dead sunflowers. We could actually smell them decomposing, an unpleasantly earthy smell. It was not hard to imagine how vibrant the field must look when they are in full bloom.

As we were passing along the outside edge of the Burgos Airport (a strange path as I imagined walking along a fence outside of the Indianapolis International Airport), we did not see one plane taking off or landing. At this point, a gentleman we had see at various points along the way caught up with us and started a conversation. He was one of those asked to read at last night’s Mass. His voice was soft and pleasant, bringing the melody and sophistication of an English accent, as well as a careful choice of words, to bear on our conversation. His name was Jonathan and he might be what one would imagine as the “typical” pilgrim in his demeanor and approach. He spoke spiritually and metaphorically, working to take the conversation immediately to deeper places and meaning. I had made fun of him (privately to Sally) at other points along the way because whenever we saw him, he was in what looked and sounded like a deep and meaningful conversation but in a way that seemed dramatic. He was a kind, gentle, man and, to him, the Camino was defined by those meaningful connections – connections he sought at every opportunity. He was completely sincere and we had an interesting conversation. He wanted to know about our experience and share his. He also wanted intimacy quickly and his style and approach enabled him to go there without being off-putting. At the same time, it is a style of conversation that can quickly become draining as every syllable is an effort to reach the profound and it always has a sense of the dramatic to it. I realized where we diverged when I described most pilgrims’ quest for the “Divine” and subsequent efforts to avoid the religiously narrow expression “God.” He suggested that “divine” was a more palatable term to those who had varied experiences with organized religion. This triggered my contrarian nature but I was not interested in arguing. The bottom line is that we want to define divine in whatever way “feels” good to us and pride is the ultimate sin as we seek to be the god of our own life. I am the first to support efforts at self determinism but our obsession with control leaves no room for the larger movements around us. Have no fear America, we are not the only ones who feel that “it” is all about us. Perhaps this is Lesson #1 from the Camino: it is not all about you. Maybe this is the only lesson.

The final push into Burgos was long – about 7km through the urban fringes. Sally’s blister shifted and became painful as the skin detached. I also began to experience painful discomfort at the base of my Achilles’ tendon into my heal – a recurring issue toward the end of our days this week. We both put our sandals on and made our way slowly into the city. We were walking in a seemingly endless park that ran along the river. From a distance we could see the spires of the Burgos Cathedral, near which we would be staying. Today was our longest day to date, 16 miles. We both felt it and were grateful that we decided to take a rest day in Burgos.

We made it to our Hostal, a place called riMboMbin – yes, that is the name. It is actually a very nice place, totally updated, and perfectly located for us. There is an attached restaurant and we visited it twice in the evening: once early for beer and tapas and once again later for beer and more tapas. The city center was hopping last night as we wrapped up our dinner at 9:30pm. People filled the bars and restaurants and we could hear the buzz continuing as we passed-out at 10pm. 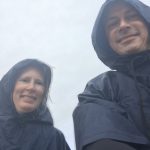 A Day in the RainUncategorized 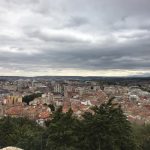