A Day in the Rain

The joy of Hostel.B continued with breakfast – I went down at 6am. Joaquin was already back in the kitchen getting things ready. Just the fact that our hostel had coffee and breakfast in the same building was a tremendous luxury. Adding Joaquin’s wonderful over-easy eggs, bacon, sausage, and bread brought it to epic status.

Around 7am, Benedict joined us. I learned that he is an investment manager and works independently. We talked briefly of hiking shoes and our plans for the Camino today. The weighty talk of the night before was gone and would not return. However, we did have a playful exchange with Joaquin as he was teaching me about el tenador (fork) and el cochillo (knife). Benedict came to my rescue and began teaching Joaquin about forks and knives in English. Joaquin quizzed me several times and, in turn, Benedict quizzed him. It was a silly exchange that, for some reason, we all found quite entertaining. I suppose one of the side effects of not knowing a language well is the opportunity for child-like innocence as you interact with one another in the process of learning.

We had the chance to see Marta, Soon Li, and Marguerita again before we left. Everyone looked a bit tired. Marguerita had decided to take a bus to Burgos and skip what she thought would be uninteresting and rainy segments in between. After my interactions with her, it made complete sense. I’m not sure of her age, but I learned that she lives in Rome, is married, and makes her living as a free lance Tour Guide in Rome. She lives in a small loft within a few kilometers of The Vatican. She is burnt out and ready to retire – part of the reason for her Camino – it provides a point of departure. She is a lovely person and has left early each day during her Camino to make sure she has time to do her yoga in the next village. Perhaps we’ll see her in Burgos – the Camino has a way of bringing peregrinos back to together.

Sally and I left Belorado around 9:15am and soon found ourselves in a large pack of elderly Spanish pilgrims who were moving quickly from Belorado. “Buen Camino!” they’d say as they passed. We later discovered that they were heading to Villafranca Montes de Oca, about 12 km away. As they caught us, the rain began to fall and we spent the rest of our day in our ponchos. The moisture made the 55 degree day feel colder but it was still a pleasant day for walking and the wind was far less intense.

In Villafranca Montes de Oca, we had the chance to join a couple we had seen at Hostel.B in a crowded bar when they invited us to sit at their table. Claudia and Jeronimo were from Mexico City and nearing the end of their adventure on the Camino. Her English was about as good as my Spanish but we were able to communicate pretty well. They planned to head home from Burgos and had forwarded their packs to make their last two days less exhausting. Jeronimo did not speak English, but we became fast friends once he offered me a shortbread cookie with coconut crumbles on top! Generosity is a language that crosses all borders.

The Way out of Villafranca was very steep and we slowly made our way up. The misty rain was steady and the trail up the hill slick. As we crested the incline, the landscape changed from the harvested fields below to dense forest. There were numerous peregrinos leaving as we did and a line of us formed up the hill. I was able to tell that we had quickened our pace from earlier climbs and we weren’t exhausted at the top.

One daily routine we’ve adopted since beginning this trip has been to pray the Rosary together as we start down the Camino each morning. We’ve started offering up our Rosary for others – known and unknown. There are many causes to choose from. We also add our own prayers as we come to each Mystery. Our additions to this traditional Catholic prayer have brought it to life as we walk each day and they enable us to pull real-time observations into this shared time. This time together has been a good way for us to center ourselves and focus our minds for the day ahead. Interesting note: we use a Rosary that we purchased in Lourdes.

At various points along the Camino, make- shift memorials and markers appear. Many of the spots are created with rocks that are either stacked, arranged in designs, or tossed in piles. Sometimes they will have names written on them, sometimes there will be photos or other artifacts placed on the site. Today, we came across an oasis that had a lot going on. Benches had been cut for pilgrims to sit upon and there was a pile of narrow slices of tree trunks with names and messages on them. The location was actually pretty good as there were no other places to rest through this stretch.

Late in the day, the rain finally lightened and the sun poked through occasionally as the clouds moved along. We stayed on the forest paths all the way to San Juan de Ortega. Coming out of the forest, we came across the English lady who reportedly took a spill in the steep descent of the forests to Roncesvalles. We last saw her about 10 days ago, sitting beside a brook outside of Zubiri. She looked just as serene today as she rested in the meadow. She didn’t appear to recognize us and had little to say so we moved along. I promise myself that we’ll get more out of her if we see her again.

San Juan de Ortega was a disciple of Santo Domingo and worked with him to build bridges and roads for pilgrims. He is known as the patron saint of innkeepers and later became the saint of fertility as barren women conceived (including Queen Isabel la Catolica) after praying at his tomb. This small hamlet named in his honor holds two albergues and the Hotel La Henera – our home for the night. After a pizza and a glass of wine, we head to the Pilgrim’s Mass in the chapel. This is a true Pilgrim’s Mass – no one but pilgrims are in attendance. They have a book with the service written out in multiple languages and the priest has various attendees read during the Mass. He spoke his Spanish slowly during his homily which enabled me to understand some of it. His message: open yourself to the Camino, experience its gifts, and take those gifts back to the ones you love. At least that was my interpretation. He shook my hand warmly after the service – I regretted that I could not speak with him more deeply than my 3 year old Spanish vocabulary would allow. I really felt that he had a heart and perspective for this thing they call the Camino de Santiago.

Tomorrow we make our longest trek yet as we move on to Burgos. 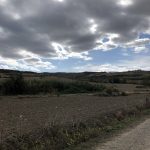 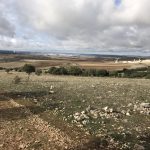