Navarrete: Surprises Along the Way

Almost every peregrino we’ve encountered on our journey uses the Camino de Santiago guide written by John Brierly. It is thorough and updated. He breaks the Camino into 33 stages that average to about 15 miles per day. To date, our average has been 13 miles per day so we decided to stop in Viana yesterday to break up back-to-back 17 mile days. Know thyself.

For me, sleep has been a challenge. Though we are quite tired by the time we arrive in each village, sleeping in a different bed every night makes it difficult for me to get “good” sleep. The variables are extensive: the bed itself, temperature, outside noise, outside light, sheets/blankets, and the various aches that can be disruptive to restful sleep. After our first night, we decided that the bunk room approach in most albergues was untenable and fortunately, there are many options along the Way from a lodging perspective. I think this will get better as it gets colder and I continue to adjust.

Today, we will cross over into the region known as La Rioja and pass through another large city, Logrono. La Rioja is Spanish wine country and we will spend the day among grapevines and olive trees. The climate is described as “more Mediterranean” which appears to mean dry and hot. We encounter our second 80 degree day which doesn’t sound too bad but it is intense for 6 hours on the open road. I read that there are 500 wineries in operation in La Rioja and about 85% of the 66 million gallons produced annually is red – vino tinto.

Logrono is only about 6 miles from Viana and we reached the suburbs of this city of 155,000 by Noon. As we descended into the city, we saw numerous church steeples, large bridge and many apartment looking buildings. There is a pilgrim’s office at the edge of the city and we were given some guidance, including Mass times for the 4 churches in our immediate vicinity. We opt for a 12:30 service at Iglesia de Santiago. There were few pilgrims in attendance and it was very much a gathering of their parish community. I noticed that many of the families in attendance were large groups, dressed in their Sunday best, and included the very young and the very old. Though I could not understand their conversations, it was clear that the older members of the family were revered.

Afterward, we found a corner cafe to have lunch. They offered a tempura-type shrimp and fried calamari which was a welcome change from the bocadillos and tortillas we have mostly seen in bars and cafes. However, the fried food coupled with the heat and an empty stomach made for an uncomfortable walk out of the city – lesson learned. Conflict has destroyed most of Logrono’s medieval buildings so it has a more cosmopolitan feel. The pace is faster, the citizens well-dressed, and the buzz a bit louder than anything else we’ve seen. La Rioja has the highest per capital income of any region in Spain and what we saw of Logrono seemed to reflect more wealth.

Leaving Logrono involved a nearly 4 mile walk through what felt like an extended park. Paved paths past fountains and green spaces gave us a flat surface to walk upon and shade for most of the way. It also felt like we were in the city for a very long time. On the edge of the city is a small lake and park; with its modern feel and park amenties, Logrono felt like something we’d see back in the states. Here, we met Katie from Boulder and Oson, a friendly woman from Denmark. We had seen Katie at the church in Logrono so phase II introductions were in order. Following not far behind was a gentlemen who we later learned was Nathan from Brisbane, Australia – they moved on quickly from our more moderate pace.

Navarrete, another medieval city built on a hilltop, was visible from a distance which creates the happy sensation of seeing our destination followed by the disappointing frustration of what felt like an incredibly long time in getting to it. We descended the long path to the base of the village before climbing the narrow streets into the city and eventually arriving at Hostal de la Navarrete – a decent place situated at the base of the Church of the Assumption.

We cleaned up and walked across the street and up another hill to a tree-lined square with the Bar Deportivo located at one end. The square was enclosed with a four foot wrought-iron fence and sported two rows of sycamores that had been trimmed to the same height and in a manner that resembled a grape vine or perhaps an olive tree. The big leaves provided a wonderful canopy and tables and chairs were spread around the back half of the courtyard. An alley ran alongside the square and the church could been seen pointing toward the sky directly above us.

Deportiva provided the best overall dining experience we have yet encountered in Spain. The proprietors were lovely people, the food was outstanding, and the setting perfect for a comfortable evening. We opted for the Pilgirm’s Menu which, in this case, was a three course meal including bread/salad (big, tasty salad), entree (chicken legs in some kind of garlic sauce), dessert (a caramel something called alhambra), and bottle of wine (red from Rioja!). Here, we ran into our new friends Katy and Oson who we learned had met on the Way from St. Jean to Roncesvalles. They were both warm and carried that joyful spirit of people comfortable with themselves and their place in the world. Katy, a marathon runner, seemed less about seeking and more about finishing.

Early in our meal, we noticed an old man with a walker, working his way down the incline of the alley next to us and toward the open square. He was dressed in a sport coat and had a dressy straw hat on. Behind him came a woman in a wheel chair, dressed just as nicely, and being pushed by a younger woman. The man stopped, removed his hat, and gave us a warm “buenas noches” though his voice was so weak we could barely hear him. I would place his age at mid 90’s.

We watched as they were set up to enjoy the fading day at the edge of the square. Husband and wife, seated next to each other as caregiver sat at a distance behind them, letting them enjoy their time out. Sally and I were both captivated by this old couple and the man caught our particular attention. At various points, he stood up and shuffled with his walker up and down the square, keeping himself moving and exercising his legs. I very much wanted to talk to them but it was clear my limited Spanish would be a major barrier. Instead, I walked over and asked if I could take their picture. His response was precious. The old man understood immediately and wanted to stand up to properly pose. His wife smiled but was otherwise unresponsive. He was concerned about his hat and how his jacket looked. I motioned that he was fine as he was, smiled, and took a few photos. I thanked them repeatedly, bowing as I moved away. It was difficult not to feel reverence standing before their age and experience – before the bright light of his eyes.

I returned and rejoined Sally at our table. There were tears in my eyes. I’m not exactly sure why. For a few minutes, I sat there contemplating those two individuals and that moment. What would I have said to him had we shared a common language? What would he say back? I imagine simple words, in brief sentences. An appreciation for the evening and the light breeze. Happiness at being able to move about the small square, see the people, and hear the conversations. Not a word of complaint about discomforts or the ravages of age. He was content, not struggling with his place in the world, simply moving with it. When his time comes, I suspect it will be a graceful exit; a good death befitting a good life.

As he shuffled off toward their home, he stopped beside our table, removed his hat courteously, and bid us a good evening. Then he smiled, motioned toward an archway ahead, and whispered something about going home. He worked his way as far as he could on the incline, then the caregiver stepped down and pulled on his walked to help him over the last few feet to the plateau. Precious. 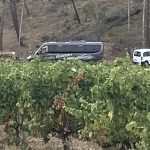 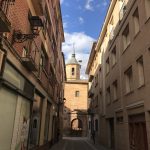