Today’s post on our Camino experience will put special emphasis on what I will call our first stereotypically American encounter on the Way. We have met a number of American Peregrinos in the first week of our pilgrimage. Individuals seeking…something, just like everyone else. Burdened with full backpacks, starting in St. Jean or Roncesvalles, and walking their way to Santiago. True pilgrims. I’m including those who have chosen to use bag forwarding services. See Back in the Saddle: On to Los Arcos.

The Americanos at the center of today’s story, took a special approach to the Camino. In my previous post, I referenced a group of American men who passed us as we were walking to Los Arcos. Our encounter was brief and cursory. During our hike to Viana, it was a different story as we had the opportunity to learn more about this curious group of Amerigrinos and interact with them on multiple occasions.

First of all, forgive my tongue-in-cheek approach to this post. I love my country. I love all that America represents and I am proud of our place in the world. We are far from perfect, but America is still the closest thing to a shining “city on the hill” and holds a special place in and responsibility to our planet. However, we Americans have a reputation for being pompous, self-centered, and kind of spoiled. Right or wrong, enough of us have went forth into the world to leave that impression. C’est la vie.

Today’s tale is an ironic reflection on the stereotypical approach we Americans frequently apply to life as consumers: of people, places, things, and experiences. In fact, it is so stereotypical that I hesitate to share it for fear of fostering unfair conclusions about our fair nation. Fellow Amerigrinos, and plain old Americans, please forgive me if you can’t find the humor in it. For my fellow peregrinos, yes, we can laugh at ourselves.

We ran across yesterday’s group of Americans again today as we were starting our trek toward Viana. The first wave of them passed us early in the morning followed by a few more along the way.

A thing to note about getting to know people along the Way, it happens in phases. Phase 1 is a generic greeting. Phase 2 is when you’ve now encountered someone more than once and feel compelled to ask where they are from. Phase 3 is when you’ve encountered them 2-3 times and feel compelled to ask their name. Phase 4 would be agreeing to sit down together over a beer or snack – an advanced relationship along the Camino.

Phase 1 with our American friends played out as usual but the English connection prompted an acceptable “where are you from?” Phase 2 moved from identifying us as the Indiana couple to “Did you attend IU or Purdue?” Given that we are Butler and Indiana State grads, our identity shifted appropriately. As one might expect, there was a native of Indiana in the second wave so common ground was found and we were properly associated with our alma maters and any conclusions one might draw from such an association. For Sally and my perspective, we only knew each person from the group as Montana or California – the states from which they hailed. We were also unable to make any firm determinations on alma maters as they moved on from each encounter quite quickly.

The lightly encumbered group passed us early in our day and we caught up to them at our first stop as both of us were visiting a church built by the Knights Templar and used as a funeral chapel in the 12th century. We now discovered that the Amerigrinos were part of a tour and watched as they got the full treatment – including backstage passes. Imagine Napa Valley wine tour transposed onto a segment of the Camino de Santiago in the north of Spain. There were about 12 of them and they had a guide and a bus facilitating their Camino experience. They passed us multiple times through the day depending on their schedule. Some actually walked the distance between towns and some took the bus. We encountered their bus at multiple points along the day’s path – driver quietly walking around smoking a cigarette and about half the tourists enjoying the air conditioning. I find myself smiling as I type this.

At one point, we had the chance to talk to Montana a bit – no one ever felt compelled to actually share his or her name, why bother? He and California were walking quickly past us and he quipped that they were part of a tour and coyly admitted that there would be a lunch spread waiting at some point along the trail. For a minute, I thought he was going to invite us. At one point, we had to call to both of them as they missed a turn and were well on their way down a side path – they were appropriately gracious.

For us, the American distraction was entertaining. At one point, one of the wives (who mostly stayed with the bus) asked why we were doing the Camino (dangerously close to moving our relationship from Phase 2 to Phase 4), feeling that she didn’t really want the metaphysical answer, I dropped the short answer: it is for our 50th birthdays. Passing us later in the day, she asked “How far are you going?” We said, “all the way.” She shook her head as she responded, “You must have a strong marriage.” I detected no hint of humor or insincerity in her comment, only amazement, like we were some kind of exotic animal one might encounter on safari.

True to Montana’s word, we came upon the troupe enjoying a lovely luncheon spread on table cloths, with wine, hors d’oeuvres, and I’m certain some kind of custard dessert. Their picnic reminded me of something I may have seen in the movie, Jurassic Park, as it looked like an anachronism, totally out of place at the base of a steep incline in the heart of the arid Navarrean landscape. As we walked past them, Montana thanked us again for pointing out their missed turn, to which we said “denada” and proceeded up the steep incline. Moving away from them, I had no doubts that we supplied at least a small topic of conversation for their lunch.

As we approached Viana and the end of our day’s trek, the more adventurous set of the American tour group caught up with us after their luncheon and talked to us a bit more. They asked us where we were staying and referenced the nice hotel in which they were staying, however, they were quick to point out that they were not sure of the rates since it was just part of the tour. Given our ragged, dust-covered appearances, they may have concluded that we might be camping on a side street or at the local shelter. For a moment, I thought they were going to invite us to dinner (or perhaps give us a few coins so that we might eat) but the moment passed as did they, up and into the medieval town of Viana.

I saw the group the following morning as I was sitting in their hotel (it was clearly the nicest place in town) restaurant drinking my cafe con leche and tapping away on my iPad. I learned that today was their last day on the Camino as they would be bused to Logrono and there the tour would head in a different direction – perhaps north toward Bordeaux?. They were now without their hats and sunglasses on so we could actually make eye contact; I figured they were probably about 10 years older than me. Nice people. Personable Americans. I liked them and considered the vast difference between my experience of the Camino and their skim-the-surface, tour-guided version. I hope they found something of the Camino spirit in their experience.

Mrs. California made it clear that the very notion of walking to Santiago was beyond her imagination. Montana mentioned that he was going to go with his guide to within 100km of Santiago and do a “modified” walk so he could “earn” his Compostela (certificate of completion for pilgrims walking over 100km). Though he did not specify what “modified” meant, I suspected that, in true American style, a way to shortcut the process had been devised so he could get the ribbon. There was something in his voice that suggested he might feel like unsatisfied by this approach but it passed quickly as they moved on to corral their luggage to be loaded onto the bus.

Sally and I had a lovely day. We crossed new terrain and even saw some caballeros riding their horses along the Camino. Our feet were tired when we arrived in Viana and the residents were just starting to celebrate the Spanish National Holiday. We enjoyed our afternoon beer and tapas along a narrow side street at a very local establishment. It qualified as “very local” for two reasons: 1) our hospitalero from the pension recommended it and 2) it had a high number of drunken revelers yelling in Spanish. Too tired to do much exploring, we stayed close to our Pension and watched the spectacle of celebration. Frustrated with the late Spanish dinners (typically starting after 8pm), I found a modified menu at the hotel and we enjoyed an entrecoate (ribeye steak) for me and a hamberguesa (yes, a hamburger) for Sally. We returned to our pension and fell asleep to the vibrant noises echoing through the walled city as the residents enjoyed their dinners at beginning at 9pm+ and each other’s company well into the night. 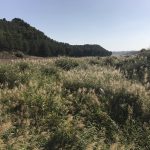 Back in the Saddle: On to Los ArcosUncategorized 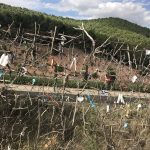 Navarrete: Surprises Along the WayUncategorized