Though our night in Orrison was restless, we woke up ready to go. Breakfast was from 7:30am – 8am and the refuge was closed at 8am to prepare for the next group of peregrinos coming up the mountain. Our legs were stiff and a bit sore but our spirits were high! The sun was just coming up and we enjoyed it for a moment before starting our climb.

The day was cloudy but the fog was not as thick as the night before. Unlike the mysterious horses in the myst yesterday, we encountered flocks of sheep moving up and down pasture on the side of the mountain. They had a wild look to them and their horns gave them slightly intimidating appearance but they were not interested in us. Cowbells attached to their necks echoed across the landscape and framed their movements in a strange harmony. Intermittent cars raced up and down the mountain somewhat accommodating sheep and human walking along the road.

Our pace was slow and deliberate. Not as slow as yesterday but still slow. We saw some of our fellow pilgrims from Orrison at several points during the day as we passed each other during rest stops. Greetings were cordial as we slowly found familiarity but everyone remained nameless except for their geographic origin: the Korean couple, the guys from West Virginia, Colorado, Melbourne, Adelaide, Ireland, Switzerland, France. We saw the Korean couple most frequently through the day and were very impressed with their steady pace – not to mention the fact that, in their mid-70’s, they were handling the rigors of the climb quite well.

Our interest in the Camino de Santiago was originally piqued by watching the movie, The Way, directed by Emilio Estevez and starring Martin Sheen. In it, Estevez’s character falls to his death after taking a wrong turn during the part of the climb we are on today. The Pilgrim’s Office in St. Jean gave us a number of warnings about the climb and we immediately recognized the place when we arrived. Cruceiro is the point right before the push up to the highest point and the cross over into Spain. Though we were in no danger of missing it, the fog added some drama by thickening as it got colder and more windy. The area is known for treacherous weather and we were grateful for nothing more than the biting wind. We were unable to see the steep drop-off to our right or left but could see the path ahead. We climbed across the last 800 meters or so and crossed over into Spain without incident.

Once we crossed into Spain, the weather and the landscape shifted almost immediately. The bleak mountainside gave way to forests and sunshine. After a brief stop at the Frontera Fountain, we began the descent toward Roncesvalles and were finally able to see some of the beautiful vistas as the fog cleared. We spoke little as we crossed over into Spain. Tired and wind blown, we were hopeful for a less demanding descent into Roncesvalles.

We started to see many more peregrinos. We caught up to some and were caught by others as we aggregated at the Col de Lepoeder. Once again, I was surprised and disappointed. Our quiet walk up the mountain became a very active event with groups of pilgrims milling about, rubbing their feet, eating, and generally having a good time. At this point, there was an option to take a road another 5.3 km into Roncesvalles or to take a more direct (and aggressive) descent through a very old beech forest below us. We opted for the forest and immediately left all of our fellow pilgrims behind. We soon learned why.

The descent through the forest was even steeper than the ascent up the mountain. Though the familiar Camino arrows indicated the downward path, we wondered if we had gotten off track. With no one else around, we moved slowly downward, shifting from straining our calf muscles up the mountain to burning our quads down it. Loose gravel and dirt made the descent treacherous – we learned later of a woman who fell multiple times on that path shortly after we had completed it. Our efforts were rewarded with an ancient forest to ourselves and the big trees with open views beneath them were a sharp contrast to the views up the mountains. We arrived in Roncesvalles a couple of hours later and found Hostal de la Posada, a welcome change from our night at Orrison.

In Roncesvalles, we encountered many of our group from Orrison. Warm greetings were exchanged and we began to feel the bond of familiarity. That evening, we attended the Pilgrim’s Mass at Iglesia de Santa Maria. Though I was not able to understand all of it in Spanish, we were able to follow along and it was a beautiful service. I noticed that the church was full of peregrinos of all shapes, sizes, nationalities, and I imagine religions (or non-religions). At the end of the service, the priest called all pilgrims to the front of the church and offered a special blessing. There were about 60 of us. In the crowd was the Irish pastor, bible in hand, and the Danish pilot who professed no religion. I was struck by the draw of the Divine to these pilgrims. Yes, we are all searching.

That evening, we joined a pilgrim’s dinner in our hostal, sat next to our Korean couple, and met a mom and daughter team from Connecticut and New York. Eight months out from her cancer treatment, the young woman wanted the chance to experience the Camino with her mother. I wonder what she’ll find along the way.

One way of categorizing those walking the Camino is their pace. Many of those we’ve encountered seem to approach the Way like a race. Up early and geared for action, they seem ready for the starting gun. We made the commitment to take a more leisurely approach and worry less about getting “there” and more about what we see and experience along the way. Today, we had many caminantes pass us as we approached Roncesvalles – most of them had started in St. Jean Pied de Port and were still able to catch us before Roncesvalles. Left to my own devices, I might tend toward that approach. With Sally’s help, I have been able to let go of my “finish line” thinking and focus more on the in-between; it has been a very good change.

Tomorrow: On to Zubiri. 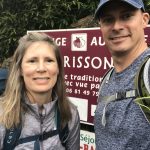 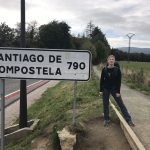