Our night in Villa Harriet was very comfortable. Breakfast was light, our bags were packed, and our spirits high for the beginning of our journey. We were about to embark on the Way of St. James!

There are two routes for the first leg of the Camino Frances from St. Jean Pied de Port to Roncesvalles, Spain: 1) the Napolean route or 2) the Valcarlos route. Number one is a grueling 15 mile trek up nearly 4000 feet over the Pyrenees. Number two is a milder path between and around the mountains.  We opted for the Napoleon route over the mountains and decided to split it into two segments staying the first night in a small refuge called Orrison – only about 5 miles but up almost 2000 feet.

After checking-in at the Pilgrim’s office in St. Jean, we stopped for a cup of coffee and a few snacks before starting the first leg of our journey. From our first step onto the beautiful cobblestone streets of St. Jean Pied de Port, we were already heading up the incline. With only a few exceptions, the incline was sustained persistently all of the way to Orrison. As we climbed, beautiful vistas of the surrounding valleys emerged. Quaint farmhouses with cows and sheep dotted the landscape. Our pace was slow and deliberate.

It soon became clear that we were in no way prepared for the aggressive climb. We were told that the climb to Orrison would take 2-2.5 hours. Two hours in, we were barely half-way. There were some switchbacks but even those were quite steep and the running joke became, “they should have put a ladder in for that one.” After the first two miles, we were measuring progress in terms of utility poles spaced about 150 feet apart; we would aim pole to pole and then rest, sometimes pushing ourselves to two poles in one spurt.

As we climbed, clouds rolled-in and it began to rain. We pulled out our ponchos and kept pushing forward. Fortunately, it was a light rain. We heard the sound of cowbells in on the sides of the mountain as cows, sheep, and even horses were adorned with them. They became a slightly eerie sound when fog limited our visibility and we could make out the animals’ shapes just beyond our ability to focus. The landscape was lush and green with a few trees and much open grassland lining the mountainside. Cars and trucks raced past on the one lane road, speeding-by obliviously to us as we stepped into the grass to provide some sense of protection.

We spoke little at this point other than words of encouragement. Our shared meditation became one of “carrying our cross” – a very real sense of taking one step at a time bearing our own weight and the extra 15-20 pounds on our backs. A reminder that we all walk under some burden weighing on us and there is beauty in the bearing of it – even when it is hard to see in the moment. We worked to focus on the world outside of ourselves, talking about our experience in Lourdes, our children and grandchildren, and the days we anticipated ahead.

Most of all, we focused on supporting each other. Encouragement became a powerful way to externalize beyond the physical discomfort and fatigue. “You can do this” became our mantra and we realized the importance of focusing on that notion. The distance I originally thought as slight was clearly significant and it was going to take all of our will to complete our first leg.

Orrison was a small collection of rooms over a relatively small dining room with a hearth. Walking-in to the reception/dining/bar area, a group of pilgrims turned to look at us and the young woman behind the bar stood there looking blankly. Bonjour, parlez Anglais?, I asked. I smiled as she looked at me as if she had no idea why we could possibly be there. She warmed slightly after several minutes of my goofy attempts to  be personable.

The refuge was no-frills. With our room, we received a token for a 5 minute shower. However, dinner and breakfast were included. We walked back outside into the rain so we could go upstairs to our rooms. She showed us into a large porch area that served as a mudroom – shoes, ponchos, and gear were lying about as wet clothes dried on racks. We were asked to remove our shoes before we went back to our room – a small space holding three bunks with two pilgrims curled up in one set. I knew we were in for an experience when we were shown our paper sheets and pillow case.

After quick showers (which fortunately produced warm water after about 90 seconds of our five minute allotment), we dried ourselves with our new 2×2 microfiber towels, got dressed, and returned to the dining area to hang out until dinner at 6:30pm. The other travelers were grouped at their tables: two quiet tables and a rather lively table of at least two older Irishmen with a group of younger ladies who seemed quite entertained. The pilgrims we met our in our, a father and daughter from Denmark, later appeared and we spent some time talking with them. She spoke flawless English and was quite engaging. Her father was also very personable. For the most part, everyone else stuck to their groups until dinner.

Dinner was a curious affair as we were introduced to the “pilgrim’s dinner” which we’ve come to discover essentially means chicken and soup. The group of about 25 pilgrims was asked to introduce themselves and state why they are doing the Camino. Most were there to find something, typically themselves. The louder Irishman was actually a pastor of sorts, had some issues with the Catholic Church, was traveling with his wife, and also ended up being one of our roommates. Some had just quit jobs. Some had recently broken up with a boyfriend. Two were recently retired. One Korean couple had done the Camino once before and the husband wanted to do another one before his 75th birthday in November. The group was quite international though there were three other Americans besides us.

Dinner was complete around 8pm and we retired to our rooms. I laid in my bunk wondering what to do next. Perhaps we’d continue the discussions from dinner or tell stories. I was surprised when our Irish roommate decided it was time for bed and turned off the light at 8:30pm. Perhaps because of the arduous climb, everyone was ok with it as the sounds of breathing indicated sleep for most. For me, it was the start of a sleepless night of crinkling paper sheets, snoring, and being up and down to break up the monotony. I later found myself in the mudroom area where the cold, rain, and quiet seemed a welcome reprieve from the stuffy room in which the Irish wife wanted the window shut because she believed she was getting bitten by mosquitos.

Later, further on, and down the other side of the mountains. I discovered that everyone else staying in that place found it to be a dreadful experience.  But in the moment, we all endured it silently and as if it was completely normal. Laying there in wee hours, I wondered what we had gotten ourselves into and If the sleepless night was going to hamper our ability to complete tomorrow’s distance and elevation – nearly double the first day’s. Around 2am, Sally, climbed down into my bunk, “it’ll be ok, I whispered. We’re in this together.” 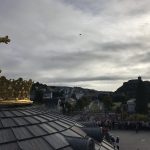 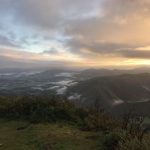