I thought I could describe a state; make a map of sorrow. Sorrow, however, turns out to be not a state but a process.

The great Christian apologist, C.S. Lewis, wrote two books dealing explicitly with suffering and loss. In The Problem of Pain, Lewis reconciles the existence of an all-loving and all-powerful God with the presence of evil and suffering in the world. The basic premise of the book is that humanity is gifted with free will and that in the exercise of such free will, there will inevitably be those human beings who behave wrongly in the pursuits of their self-interests. The book was published in 1940 as a hopeful answer to the death and destruction brought about by the evil of Nazi Germany then spreading across Europe. The Problem of Pain is a brilliantly argued philosophical answer to the existence of death and evil in a world created by a loving God.

Lewis’ second book on loss and suffering was written after the death of his wife in 1960. In A Grief Observed, Lewis reflects on the raw, heartbreaking reality of losing someone dearly loved. The book captures the emotion, doubt, and despair along his particular journey of grief and reflects his efforts to “survive the midnight moment” of crushing loss. The Problem of Pain takes a somewhat detached intellectual approach to arguing a set of deep philosophical and religious precepts. A Grief Observed loses none of Lewis’ intellectual power but adds an emotional depth that gives the story weight causing it to resonate more acutely with those walking the paths of grief and loss. For me, A Grief Observed brings C.S. Lewis alongside the reader during his/her own loss and The Problem of Pain builds a bridge to hope once the reader has stabilized emotionally and seeks a more rational answer to the mystery of loss and suffering.

Last night, my sister-in-law passed-away at the age of 52. After years of battling health issues and the suffering associated with them, she has found peace. Though her diagnosis a year ago made it clear that her life was on a finite timeline, the end still seemed sudden and surprising. In spite of the specter of her own end floating on the horizon, she managed to suffer well and exuded a joyful enthusiasm for life over these last 12 months. Death comes for us all, but she saw it coming and found the strength to complete her journey bravely. Now, the long, slow path to closure and coping must be walked by those she left behind.

Curiously, I came across a TED Talk on grief just a week or so ago. The speaker talked of her husband dying and then remarrying a few years later. She said that people always talk of “moving on” as it relates to the loss of loved ones and she challenged that thinking by arguing that one never moves on. Those we lose are part of who we are by virtue of having been with us along our way. For her, her first husband was still a part of her life through the child they had together and through the woman she became with him and after his death. The same woman who her current husband fell in love with and chose to marry and build a new life together. Her message: We don’t move on from grief, we move forward with it.

One of the special gifts of my wife, Sally, is how she actively keeps the memory of those we’ve lost alive by telling their stories. Just yesterday, she was telling stories of her grandfather who died shortly after we met in 1988. It was the anniversary of his passing and we spent a couple of hours of a long drive talking about him and his life. Since I’ve known her, she has done this consistently and I’ve come to know many others from her life much better through her joy in remembering them, their sometimes wild stories, and the love that existed in those memories. The losses all hurt and some still do, however, she has very much moved forward with her own grief and brought the joyfulness of the moments before along with her.

Whenever we come face-to-face with death, there are so many appropriate platitudes to remember: Every day is a gift. Cherish those we love. Don’t take moments for granted. Don’t wait to forgive…to chase your dreams…to say “I love you”…to call the people you love…etc. These are all good things to remember. We can all do better in these regards. We will all fail to get anywhere close to perfect in any of them.

Today, my brother-in-law and his children are looking upon a world that has changed radically. Every day, there are those awaking to the same sense of radical change as they look upon a world that is shifting under their feet. Whatever struggle existed before has morphed into something new. New choices. New challenges. New opportunities. All strange. All different. All new.

For the rest of us, perhaps we can remember the platitudes, but more importantly, look at those living with loss with new eyes and work to avoid our own impatient encouragement to move on. Instead we might pull-up alongside them and hold their hand as they move slowly forward. The stories, memories, struggles, joys, and moments are all a part of that person and he/she will carry them always. In this way, we honor what was while we show understanding for those long days ahead where the way is unclear and each step feels a bit unstable. Until one day it doesn’t. For each of us, forward it must be. 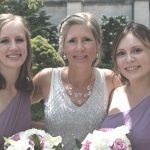 The Feminine Genius of MotherhoodInspire

Life, Death, and the Faces of FearInspire