Shiny Objects and the Slow Game

It’s easy to say “no” when there’s a deeper “yes” burning within.

About eight weeks ago, we added a new member to our family: a golden retriever who we named Edie after one of my wife’s favorite inspirations, Saint Edith Stein. Though we are still working on her saintliness, Edie’s energy and curiosity inspire lively conversations and occasional frustrations.

Recently, Edie provided plenty of frustration as I struggled to get her around the block one morning before leaving for the office. Though just a puppy, Edie is strong and willful. Like most of us, she wants to do what captures her imagination, or at least her attention. The simple act of walking down the sidewalk became an amazing adventure as every sight, sound, movement, or smell required keen investigation.

As I gripped her leash, straining against her persistent lunging after some incredibly fascinating leaves blowing across the sidewalk, I began to laugh out loud as she chased everything that moved in a frenzy of instinctive playfulness. Moving on from the leaves, every nut, branch, tuft of grass, rock, dirt clod, or insect we passed had to be licked, sniffed, or picked-up in her mouth. The walk became comical as she chased everything we encountered and I resisted her almost every step of the way. Eventually, we finished our walk and she collapsed on the floor in our house, exhausted from the exertion.

Driving into the office, I smiled as I thought about her fascination with all of the random things along the way. Imagine walking out into the world and finding it all new again. Then multiply that with senses that are many times more powerful than our own. I’m sure Edie is overwhelmed as she tries to process all of the new inputs.

As humans, we may not have a dog’s super senses, but we have minds that see, evaluate, and process incredible amounts of information alongside motivations that are far beyond the simply instinctive. Our complexity enables us to discern in different ways but does not guarantee an ability to focus. Often, our complexity serves to distract us even further as we become enamored with the new, fascinating, or alluring.

How often in your day or week do you find yourself chasing the “shiny objects” that appear along the way? The distractions are endless: email, social media, TV, conversations, text messages, phone calls, or even the people we see outside of our windows doing the curious things that people do. As I write this post, I’m fighting the urge to watch the televisions in the hotel lobby showing scenes of destruction from a hurricane that hit years ago. Interesting, yes. Fascinating, yes. Keeping me from writing my post, yes.

The shiny objects in our lives range from the mundane leaves blowing across our path to the more significant diversions that appear in the guise of opportunities. Our work lives are littered with the wreckage of good ideas that later turned out to be just distractions. in addition, many of us are assailed every day by individuals whose job is to draw our attention to their product, service, or idea as they try to sell us on its merits. Are they bad people? Not usually. They are just trying to make a living. Alas, that living often requires interrupting us as we go about our own business of making a living.

The sheer volume of shiny objects in our lives can make focus very difficult. Everyone is competing for attention and we have gotten really good at grabbing it. For those of us trying to accomplish anything, the dangers of distraction are many as we get delayed or derailed on important objectives, often by far less important distractions. Meanwhile, the myriad diversions and interruptions conspire to wear us down; it takes a lot of energy to discern, evaluate, manage, reject, or accept so many possibilities. I shake my head as I think of all of the leaves blowing across our paths.

We all know the dangers of distractions, yet, we all continue to wrestle to discern and then focus on priorities. We also know the power of focus. Think of the last time you brought all of your powers of concentration to bear on a specific challenge. We are capable of astounding feats when we focus. Our effectiveness is dictated by our ability to manage the tension between our distractions on the priorities on which we need to be focused. How can we do better?

Here are some ideas for managing the shiny objects in your life:

As a proponent of a “follow the signs” approach to life, I fully embrace the notion that we have to be open to new opportunities and keep our eyes open for the indicators that appear along the way. New opportunities are great, until they aren’t. Alas, we never know until we know. How do you know when something is an opportunity or a distraction?

Look at it through the lens of your objectives. There are opportunities that gratify us, flatter us, capture our imagination, or appear as “game changers.” Most of the time, they will be distractions, yet, we still look because we all want the home run, the big one, the bold move that changes everything. Just because it looks like a “game changer” doesn’t mean that it’s not, just remember that most of your great moves are the ones that are small, intentional, daily, and sustained over time. Your focus and effort, sustained through adversity and resistance over time, is your surest path to achieving your goals. If the shiny object sits too far outside of your swim lanes or is a categorically new objective, tread carefully. To follow the signs is to be open to possibility but it also requires discernment.

Regardless of how you define it, success is a slow game. We make progress in small steps with sustained effort. In contrast, shiny objects come at us rapidly. We often respond quickly because of the sense of urgency brought on by distractions. Being your best requires discipline through the slow, as you react to the fast. Begin by contemplating your priorities. Or, as Stephen Covey says it: begin with the end in mind. Once you can see that end clearly, then you can better resist the near occasions of distraction that will assail you along the way. From there, persist, knowing that small movements that often feel slow, are taking you where you are supposed to go. 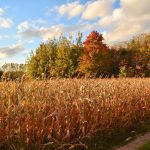