My morning yesterday started with a conversation with Marta, one of our Italian friends. She was bubbling about her Camino experience and how sad she was to be nearing the end. She told me that the Camino is a metaphor for life – the ups and the downs. She had started it not really sure if she could finish it. Pushing on, she slowly began to believe she could. I asked her, “Has this journey been life changing for you?” “Yes. If I can do this, I can do anything,” she told me as she smiled. The tiny tears in her eyes caused mine to well up. Marta pushed through to a profound change and her world would never be the same. She said that she looked forward to celebrating with us in Santiago. I bid her “Buen Camino.”

We were in a group of peregrinos as we started out from Portomarin yesterday. As we crossed back over Rio Mina, we got a better look at the ruins of the former town scattered along the banks of the low rive below. It was a little haunting to see the remnants of stone – it would have been quite a scene to have see it in it heyday. Rows of medieval stone houses and buildings lining cobblestone streets. The heights above would have provided a complete view of the hamlet and its winding streets. It is amazing how they rebuilt the town above.

We walked uphill from the river admit the line of pilgrims – all newbies. They were grouped thickly and having difficulty establishing a consistent pace so we walked a bit faster to get put some distance between us. We passed a few farms and a feed plant that were producing an odor strong enough to gag. I’m not sure what they were doing but the smell was incredibly unpleasant. A couple of hours in, we came to a small cafe and decided to stop for a break. It had just started to rain.

There were many peregrinos at this stop and it had a tented area outside so I brought our Cokes and empanadas outside. Sally went in to use the water closet and came out a few minutes later saying “Get your stuff, we need to go inside.” Her voice seemed quite serious and I looked to the sky thinking a storm was about to hit. “I found Oxana inside and she has a sprained ankle. Let’s go.” I waited for a moment expecting her to say “Stat!” but she didn’t and we went in. Oxana had her leg up on a chair with an ice pack on it. She looked frazzled but was clearly happy to see us. She said the front side of her shin was really hurting and that she could barely walk. She didn’t think she had rolled her ankle but it had really started hurting the day before. We had just bought some ibuprofen and an anti-inflammatory topical cream (highly popular with pilgrims) last night and offered both to her. She accepted graciously, taking the ibuprofen and applying the cream.

We sat and talked for quite a while. She said she had hoped she would run across us in Sarria. She actually had dinner with Julia and Kayla that night which would have been a fun dinner to be a part of. Her last two days had been difficult. She had stayed in a very old and updated house with three bedrooms by herself in Sarria and had thought, “Phil and Sally would love this place!” She even suggested that I would have enjoyed sitting by the fireplace in the morning to write. She experience a sharp pain in her leg that morning and had literally limped in Portomarin. An unfortunately common peregrino end of day experience. She had started off yesterday morning slowly, hoping she could nurse along but the pain had become intense to bring tears to her eyes as she stopped at the cafe. By the time we had finished our food, drinks, and snacks, her shin was starting feel better and we set off together slowly. She suggested that we go ahead at our normal pace but we had no intention of leaving her and she didn’t really want us to move on. Pain breaks it all down very quickly and we all get lonely fast when we are hurting.

The rain was steady all day though much of the path was along back roads. Sally’s water resistant shoes had been hurting her feet so she opted for her more comfortable walkers. Oxana was in her sandals and the roads helped all of us avoid some puddles and mud. We walked for a few hours and stopped for lunch. At this point, we take what we can find. Many places are closed and we’ve never sure when we’ll find the next bar or cafe. It felt good to get out of the rain and enjoy a warm meal. We saw Shel and Alex as well as our Spanish pals who we had passed earlier as they were gathering mushrooms along the path. Lots of mushrooms in the perpetually damp undergrowth.

We covered the 25km and moved slowly into Palas de Rei. The stone pathway held standing water for the last kilometer or so into the town but fortunately, our hotel was one of the first. We agreed to meet a bit later for dinner.

We met at Pulperia de Caminante which was perfectly located right next to our hotel. Galicia is known for pulpo a Galega, boiled octopus seasoned with paprika so we put that on our list for dinner. We also had padron peppers cooked in olive oil, a plate of assorted meats and cheeses, as well as some baby squid grilled. We started our meal with shot of Orujo arribas and enjoyed a couple of bottles of vino tinto from Rioja – now my preferred Spanish wine region. As we were sitting, talking and laughing about our this week’s adventures, Michelle from Austin walked in and stood by our table. She looked frazzled and had apparently ran into a similar wall with shin/ankle pain that Oxana experienced earlier in the day, which had been greatly improved by the topical cream. I had the tube in my pocket, showed it to Michelle, and offered her some. She brightened and headed out the door to buy her own. Our food was still coming out when Michelle returned and asked if she could join us as she sat down saying “I’m assuming a “yes.”

We spent the next several hours eating, laughing, and talking about the Camino, those we’ve encountered, and what we’ve experienced. Oxana and Michelle both hit their breaking points yesterday. Michelle said that she did the “peregrino limp” into Palas de Rei, asking herself if she could go on. She happened to see me as she passed the restaurant and came in. When we’re hurting and feeling broken, anything familiar can be a lifesaver. We learned that Michelle had quit her job of 12 years in New York and was transitioning. Apparently, she has a ranch outside of Austin, a factoid that came up as she was talking about the Camino being a journey for the affluent. Michelle has her own brand of irreverent humor and we all laughed at ourselves and many of our difficulties during our Camino journey. We decided that we would meet again on Saturday for dinner in Santiago.

Our Irish family came in late – they had had another long day. Kieva was experiencing significant pain in her Achilles’ tendon and heel – where my own pains had been. I offered her some of the cream and she became a believer. The thing I knew, Sally had walked over, scooped up baby Lorchan, and was doing her Nanny sway with him in her arms. He fell immediately in love.

Each of us agreed that the Camino had in fact become more difficult as we‘ve walked closer to Santiago. Our bodies are wearing down from the constant walking, the rain is weighing on our spirits, and we are all very tired. This final “breaking down” process of the Camino is the most raw and elemental. At the breaking point lies true vulnerability and vulnerability allows us to connect at a different level. Putting aside Michelle’s teasing about “boujie” pilgrims: all of us recognize that there are no pretenses at the edge. Each of us knows that the next three days will be the hardest and we will push on anyway. In our brokenness, we finally ask for help. It is at that edge that we find we are finally ready to arrive. 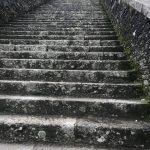 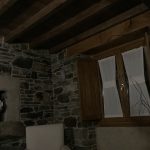