Sitting in Mansilla de las Mulas (hand on the saddle of the mules) this morning, I take stock of our journey to date. The Camino de Santiago has all and none of what I expected so far. Even though I intellectually understood that we would be walking great distances, I had no concept of what it would feel like to walk 280 miles in 22 days.

Even though I knew we’d see many villages, cities, churches, and other sites, I had little concept of what it would feel like to walk into enormous cathedrals, stand in 1000 year old sanctuaries, or walk the streets of now bustling cities built, literally, on the foundations of a complexly intertwined history of Roman, Moorish, and Christian stories.

Even though I knew we’d encounter many people and all the variety that goes with humanity, I had little concept of what it would feel like to hear their stories, walk with them on the Camino’s sendas (pathways), and begin to know them through repeat encounters. The Camino removes so many of the differences we see and even more of the distances we might anticipate between our different tribes, nationalities, and creeds.

Even though I knew I’d miss home, I really had no idea of what three weeks away would feel like and I resist the temptation to anticipate the longing that awaits us in the weeks ahead. There truly is no place like home. I read much about what to expect but knew nothing of what I might feel on this journey.

Yesterday’s distance matched the day before at 16.7 miles. We are now conditioned for that distance, and though we were over-it mentally and physically by the time we arrived, we know we can cover it when needed. A good test for some of the long days in the mountains ahead of us.

The Camino between Bercianos and Mansilla was a fairly straight, and relatively comfortable, walk on a senda built alongside a fairly quiet country road. We had clear skies and sunshine for most of the day and the temperature was in the upper 60’s. Perfect day. Our first stop, in a village called El Burgo Ranero, was a happy one as we enjoyed clean bathrooms, a Coke, and a Spanish version of a BLT – they used slices of ham that were kind of similar to bacon but the overall effect was happiness.

The stretch between El Burgo Ranero and our next stop was nearly 13km so we got ourselves situated and headed out. We stretched our legs a bit today and moved through the countryside more quickly than previous days. We caught up to Kayla at a rest point a couple of kilometers into our walk – she was planning to meet Julia in Leon and continue from there. She was smiling and relaxed; clearly enjoying her walk. As I consider it, she is always smiling when we see her.

The pathway was lined with small sycamore trees that had grown enough to provide quite a bit of shade. We noticed that the same type of tree had been planted uniformly in broad swaths in a number of places along creeks and between fields. They added much texture and color to the landscape and I suspect play major role in maintaining a healthy ecosystem in this part of the Meseta.

We reached Reliegos and stopped at the first cafe we saw for a rest and snack. Another Coke, a chocolate chip muffin, a slice of lemon bread, and some Cheetos were on our menu as we removed our shoes and sat. After a 45 minute break, we walked through the town and saw Kayla sitting outside at the next cafe. She had changed into shorts and was putting sunscreen on – a true reflection of how nice the day was yesterday.

Mansilla was about 3.5 miles away – the last mile is always the toughest – but we made it and checked-in to Case de los Soportales which happens to be affiliated with an albergue and restaurant around the corner. Mansilla is an interesting town that still has some of it medieval walls intact. One section near where we are staying was called the Puerto de Santiago (door of St. James) as every medieval pilgrim traveling the Roman road would pass through it on his/her way to Santiago.

As we walked into the courtyard to grab a beer before dinner, we were greeted by a loud “Phil! Sally!” and looked over to see our new friends, Zee and Diane sitting at a table. Zee had a red safari hat on and they both were wearing their Wild Thornberry trekking shorts. They motioned us over and invited us to sit down. I believe this is the first time during our trip that we’ve actually been invited to sit down with anyone we’ve met. It was a warm welcome and we joined them for a drink and for dinner.

As we talked with these two, I recognized a joyful innocence to them both. Zee, loving to joke and play, and Diane, easygoing and open. They were full of stories and observations – none of which contained an unkind word. We discovered that Diane was quite knowledgable about plants and told us about many she had seen along the way today – most we had not noticed. Zee talked about running the Mini in Indianapolis and some of the Iron Man events he had done in his younger days – claims I still find a tad hard to believe but entertaining nonetheless. Diane loved her wine and had taken photos of the various labels from bottles encountered in Spain, deciding that she far preferred anything older than 2017 more than anything more recent. I had to laugh as Diane told me that I spoke Spanish quite well; however, her compliment was sincere and generous. They head to Barcelona from Leon – the next stop on the Way. Yes, they are characters. Hopefully, we’ll find more like them.

As we headed back to our room, we talked about the change in the peoplescape that we had seen since starting the Camino. The group we left with from Orrison has scattered and we’ve moved in and out of a couple of new groups of walkers (a group being those you see more than once or twice during segments of the walk). We are in a group right now that will begin changing again as we move to a new part of the Camino. I continue to be surprised by how the Camino mirrors so many aspects of life in general. It is truly a reflection of our broader journey through life, compressed into a few weeks. 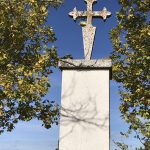 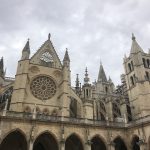