The Battle of Wounded Me

It is something great and greatening to cherish an ideal; to act in the light of truth that is far-away and far above; to set aside the near advantage, the momentary pleasure; the snatching of seeming good to self; and to act for remoter ends, for higher good, and for interests other than our own.

A while back, I was challenged to mark the moment of passing through a series of difficulties by giving them a name. The challenge struck me as darkly humorous and my first thought was “The Battle of Wounded Me.” Why darkly humorous? Because the exercise seemed strangely self-absorbed and the name captured it well. It was a moment in time marked by an inward focuse and a persistent thrashing against external forces over which I had no control.

I never spoke it out loud and later wrote it down in a journal to remind me of the absurdity of the moment and the notion of memorializing it with a name. Considering it now, the name seems even more apropos, I was truly battling a wounded me as it all unfolded between my ears. Yes, external pressures existed but the real challenge was managing my reaction – managing the things I could control.

Today marks our country’s 153rd year of formally commemorating fallen soldiers. Beginning shortly after the close of the Civil War, “Decoration Day” became a time to remember all those who, as Lincoln said, “gave the last full measure of devotion.” After World War I, the commemoration was broadened to include fallen soldiers from all wars. Once again, a national moment of remembrance will occur at 3pm today to mark this somber occasion.

We all face the internal battles, the personal struggles that mark lives fully lived. But today, perhaps more than ever, those battles have become an epic war with self. A culture bent on the luxury and self-indulgence of an everything-all-the-time secularism has replaced the greater-good serving sense of duty that marked our reaction to previous tribulations. Our Pax Americana has fostered the decay of a foundation hardened through trial, through staggering existential threats, and created citizens who no longer know the history of their country, connect with the ideals of its Founders, or truly understand the sacrifices of prior generations. Our comfort has distanced us from the struggles of ideals born of necessity and survival.

Lest we lose hope, know that all previous generations were self-serving. A trait which is fundamental to the human condition and marks even our most patriotic moments. In that sense, today is no different. Self-absorption itself is not our biggest threat. Our biggest threat is our capacity to pursue it at rates and distances previously unimagined. We are able to self-indulge on a scale that would stagger even the most cynically self-serving of our ancestors.

The Battle of Wounded Me has become a War of Wounded We with a class of victims for every luxurious slight. Luxurious because our sheer scale of comfort allow us the time, energy, and resource to be outraged at any competing view to our own. Ours is a culture of indignation and we are offended on every front. We see disadvantage brought upon us by everything but ourselves. We feel oppressed by the acts of others upon us while failing to take responsibility for our own choices. Why should we? We’ve built an entire legal industry around arguing for our point of view.

No, I’m not cynically hopeless about our great democratic experiment. Today, I’m thinking of those who’ve “given their last full measure of devotion” so we have the opportunity to argue the points above. I feel anger because we don’t treasure the gift of those sacrifices as we should. Where is the honor for our fallen? Where is the devotion to their memory?

And yet, perhaps it is still there. Young men in Littleton, Colorado recently stood up to hate by confronting it directly, one young hero giving his last full measure in the struggle to protect others. We see such an act of bravery and wonder what else lies within us that the struggle might bring forth? Could such dark moments present opportunities to renew the foundation of a nation, stirring individual souls with the call to something greater?

Today, we honor our fallen soldiers. We remember the sacrifices made on our behalf. Sacrifices made so that we might go on pursuing the opportunity to create a meaningful life – an opportunity that has driven countless souls before us. This day exists for us to remember that others gave everything so that we might continue to pursue the great experiment in freedom and self-government that is these United States.

Considering my battles, I lay them aside for a few moments to remember. Perhaps I might put them into the perspective of something greater and find comfort in their relative smallness. Or, maybe I’ll be inspired to face them with renewed courage as I consider others who have faced darknesses I cannot imagine. Maybe I’ll just let them go for awhile and embrace a gratitude born of living in a place that gives me the luxury to consider such things.

Let me close this post by allowing Walt Whitman to take us to another time; a moment when relief for the end of the Civil War mingled with grief at the death of a great leader and countless others. A reflection on the complex emotions born of a time that mourned staggering loss even as it looked hopefully forward to better days. Lines written to forever help us remember.

O Captain! my Captain! our fearful trip is done,
The ship has weather’d every rack, the prize we sought is won,
The port is near, the bells I hear, the people all exulting,
While follow eyes the steady keel, the vessel grim and daring;
But O heart! heart! heart!
O the bleeding drops of red,
Where on the deck my Captain lies,
Fallen cold and dead.

O Captain! my Captain! rise up and hear the bells;
Rise up—for you the flag is flung—for you the bugle trills,
For you bouquets and ribbon’d wreaths—for you the shores a-crowding,
For you they call, the swaying mass, their eager faces turning;
Here Captain! dear father!
This arm beneath your head!
It is some dream that on the deck,
You’ve fallen cold and dead.

My Captain does not answer, his lips are pale and still,
My father does not feel my arm, he has no pulse nor will,
The ship is anchor’d safe and sound, its voyage closed and done,
From fearful trip the victor ship comes in with object won;
Exult O shores, and ring O bells!
But I with mournful tread,
Walk the deck my Captain lies,
Fallen cold and dead. 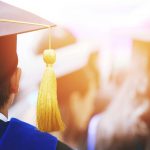 Dear Graduate: Success Is Your DutySucceed 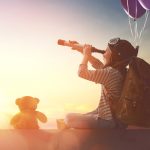 Call Them to Be ExceptionalSucceed