Knowing When to Walk Away

A version of this post was first shared in 2014, then expanded upon in my first book, Stones Across the River: The Path to Your Best Work in Your Peak Years. Whether considering customer deals, real estate purchases, investments, or investors, the notion is as relevant as ever. One might apply some of the concepts below to relationships but I would suggest extreme caution in that regard. All deals involve relationships but not all relationships should be approached like deals.

In 2014, we were looking at purchasing an old building to expand our operations into. We approached a local community and worked with their economic development committee to craft a deal. After several months of meetings, plans, and negotiations, we decided to walk away from deal; despite the fact that it was a good opportunity, workable, and beneficial to both parties, Why? Because after a certain point, the process became too painful.

The experience around that particular deal failure was one of many that formed a key value pillar for our company: Follow the Signs. For me, “following the signs” is a spiritual as well as a pragmatic process. Every major decision we face is almost always accompanied by signals indicating the beneficial, and less beneficial, aspects of a specific opportunity. Sometimes the signs are obvious, like a “DO NOT ENTER” sign on a one-way street. More often, the signals are buried in the noise and emerge as a whisper hiding in the howling wind or a tiny nudge on our conscience from a seemingly unknown source.

The big struggle comes in discerning the signs that emerge all around us. Our wants and needs frequently become confused, as do our priorities, as we get excited about a potential deal. Throw a little money in, and the frenzy begins as we race down the imaginary path of the future built with yellow bricks and taking us directly to the Emerald City. We all get lost in a deal at one, or many, points along the way. Whether we’re buying a car, a building, or a company, or, hiring a superstar, closing a new sale, or striking an economic development deal within our community, the deal takes on a life of its own and we tend to get caught up in it.

Within all of the enthusiasm, future possibility, or “too good to pass up” aspects of your deal, are buried everything you need to assess it pragmatically, as well as discern its true emotional and spiritual fit. If one steps back and takes a breath, it becomes easier to evaluate the facts of the deal. Those facts are one part of the collection of signals, but there are less obvious elements that must be discerned through quiet contemplation, self-honesty, and a willingness to accept what may go against our immediate desires. We have to be willing to accept the signs that reveal themselves.

Over the course of many years, I’ve had the opportunity to work on a variety of business acquisition, real estate, economic development, financing, and customer deals. Time and again, I’ve realized that the best deals are almost always the ones that have an easy, natural, flow to them. This doesn’t mean there is no work involved, it means that the key aspects of the deal seem to align in a natural way – a kind of serendipity. How do you know when it’s time to walk away?

A note of caution, there are obviously direct and indirect costs to walking away. The opportunity cost to a shift away could be significant as you will never know what could have been. The flip side to this post is “don’t be too quick to walk away.” There is a danger that impatience or frustration can yield equally poor results as not discerning appropriately. I suppose we could characterize that side of it as “pennywise, pound foolish.” One might argue that the edge between the two is what makes it all interesting.

Despite the unknowns, and potential for lost opportunity, my experience has been that “following the signs,” even imperfectly, yields the best results more often than not. Though I prefer to “push through,” there are definitely appropriate times to walk away, and we need to remain flexible in keeping that door open, or should I say, “ready to close,” right to the end. My point in all of this? Follow the signs, they are there if you allow yourself to see them, and they may tell you it’s time to walk away.

The Legacy of Our FathersInspire 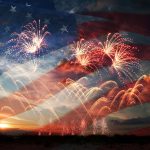 In Good and Bad, Unapologetically AmericanInspire