Life, Liberty, and the Pursuit of Happiness

Happy Birthday America! Now 244 years old, you can no longer claim novelty or inexperience. Yours is a history of brilliance and bloodshed, strife and prosperity, faith and heresy, hope and despair, laughter and tears. The bareknuckled battles that formed your founding live on through their heirs as we continue to debate the same disagreements so many years later. What kind of country should we be? What is our role in the world? What are rights and responsibilities? What is government’s purpose? What does freedom mean? How do we remain the land of the free and the home of the brave? May the conversation continue.

Rather than try to add new spin to old arguments, let’s take a quick walk through history by revisiting some classic quotations from our Founders and a few other luminaries throwing light, and shade, on concepts we continue to debate. What is liberty and do we want it? What is freedom and do we have what it takes to keep it? Only time will tell. For today, however, let’s savor the smells of our grills, the vibrancy of our fireworks, the love of our families, and the hope that we’ll figure it out. May God continue to bless America and “crown thy good with brotherhood from sea to shining sea.”

“We hold these truths to be self-evident, that all men are created equal, that they are endowed by their Creator with certain unalienable Rights, that among these are Life, Liberty and the pursuit of Happiness.” – United States of America, Declaration of Independence, July 4, 1776

“The preservation of the sacred fire of liberty, and the destiny of the Republican model of Government, are justly considered as deeply, perhaps as finally staked, on the experiment entrusted to the hands of the American people.” – George Washington

O thus be it ever when freemen shall stand
Between their lov’d home and the war’s desolation!
Blest with vict’ry and peace may the heav’n rescued land
Praise the power that hath made and preserv’d us a nation!
Then conquer we must, when our cause it is just,
And this be our motto – “In God is our trust,”
And the star-spangled banner in triumph shall wave
O’er the land of the free and the home of the brave.

“Hold on, my friends, to the Constitution and to the Republic for which it stands. Miracles do not cluster, and what has happened once in 6,000 years, may not happen again. Hold on to the Constitution, because if the American Constitution should fail, there will be anarchy throughout the world.” – Daniel Webster

“There is a certain enthusiasm in liberty that makes human nature rise above itself, in acts of bravery and heroism.” – Alexander Hamilton

“God grant, that not only the Love of Liberty, but a thorough Knowledge of the Rights of Man, may pervade all the Nations of the Earth, so that a Philosopher may set his Foot anywhere on its Surface, and say, ‘This is my Country.” – Benjamin Franklin

“Liberty and order will never be perfectly safe, until a trespass on the constitutional provisions for either, shall be felt with the same keenness that resents an invasion of the dearest rights, until every citizen shall be an Argus to espy, and an Aegeon to avenge, the unhallowed deed.” – James Madison

“Liberty is the power to do everything that does not interfere with the rights of others: thus, the exercise of the natural rights of every individual has no limits save those that assure to other members of society the enjoyment of the same rights.” – Thomas Paine

“It behoves every man who values liberty of conscience for himself, to resist invasions of it in the case others.” – Thomas Jefferson

“Straight is the gate and narrow is the way that leads to liberty, and few nations, if any, have found it.” – John Adams

The truth unquestionably is, that the only path to a subversion of the republican system of the Country is, by flattering the prejudices of the people, and exciting their jealousies and apprehensions, to throw affairs into confusion, and bring on civil commotion.

“The price of freedom is eternal vigilance.” – Thomas Jefferson

“America will never be destroyed from the outside. If we falter and lose our freedoms, it will be because we destroyed ourselves.” – Abraham Lincoln

“Freedom is never more than one generation away from extinction. We didn’t pass it to our children in the bloodstream. It must be fought for, protected, and handed on for them to do the same.” – Ronald Reagan

“The cost of freedom is always high, but Americans have always paid it. And one path we shall never choose, and that is the path of surrender, or submission.” – John F. Kennedy

“There can be no true home without liberty.” – Harriet Beecher Stowe

“Modern liberty rests upon three pillars. They are representative democracy, economic freedom, and the rule of law.” – Margaret Thatcher

But, in a larger sense, we can not dedicate — we can not consecrate — we can not hallow — this ground. The brave men, living and dead, who struggled here, have consecrated it, far above our poor power to add or detract. The world will little note, nor long remember what we say here, but it can never forget what they did here. It is for us the living, rather, to be dedicated here to the unfinished work which they who fought here have thus far so nobly advanced. It is rather for us to be here dedicated to the great task remaining before us — that from these honored dead we take increased devotion to that cause for which they gave the last full measure of devotion — that we here highly resolve that these dead shall not have died in vain — that this nation, under God, shall have a new birth of freedom — and that government of the people, by the people, for the people, shall not perish from the earth.

“Liberty means responsibility. That is why most men dread it.” – George Bernard Shaw

“Experience should teach us to be most on our guard to protect liberty when the Government’s purposes are beneficent. Men born to freedom are naturally alert to repel invasion of their liberty by evil-minded rulers. The greatest dangers to liberty lurk in the insidious encroachment by men of zeal, well meaning but without understanding.” – Justice Louis Brandeis

“My definition of a free society is a society where it is safe to be unpopular.” – Adlai Stevenson

“Liberty is the very last idea that seems to occur to anybody, in considering any political or social proposal. It is only necessary for anybody for any reason to allege any evidence of any evil in any human practice, for people instantly to suggest that the practice should be suppressed by the police.” – G.K. Chesterton

“But what is liberty without wisdom and without virtue? It is the greatest of all possible evils; for it is folly, vice, and madness, without tuition or restraint. Those who know what virtuous liberty is, cannot bear to see it disgraced by incapable heads, on account of their having high-sounding words in their mouths.” – Edmund Burke

“When plunder becomes a way of life for a group of men in a society, over the course of time they create for themselves a legal system that authorizes it and a moral code that glorifies it.” – Frederic Bastiat

“Our faith in freedom does not rest on the foreseeable results in particular circumstances but on the belief that it will, on balance, release more forces for the good than for the bad.” – Friedrich Hayek

O beautiful for spacious skies,
For amber waves of grain,
For purple mountain majesties
Above the fruited plain!
America! America!
God shed His grace on thee,
And crown thy good with brotherhood
From sea to shining sea! 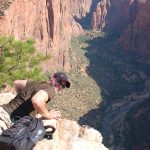 Our Need to Go to the EdgesInspire

Our Loss When Founders SunsetLead