So, first of all, let me assert my firm belief that the only thing we have to fear is fear itself —nameless, unreasoning, unjustified terror which paralyzes needed efforts to convert retreat into advance.

A few days ago, I had the opportunity to take a 4:30am walk along a pristine beach on Florida’s Gulf Coast. For this Midwesterner, the beach is a magical place. On this particular morning, the moon was full and the sky was clear except for the shadows of a few hulking clouds looming just out of eyesight. The world along the beach was all shadows except for a few feet of clarity in my immediate vicinity. Not a soul stirred – the beach, the water, the moment, was mine alone.

As my eyes adjusted to the shadowy world around me, I noticed lots movement as I walked along the shore. Herons were hunting in the shallow water, silently; some flew off as I neared while others walked away and returned after my passing, not quite ready to give up a good spot. The crashing waves masked all other sound and I would occasionally see the moon reflect off the opaque bodies of small crabs scurrying along the beach, moving into and out of the water with the urgency of survival.

Nearly three miles away, I entered a state park area without any beach houses or high rise condominiums. My sense of solitude was extraordinary; all lights were distant and the shadows along the beach began to take on a life of their own. Moonlight danced upon the still waters catching their breath between the waves and the dull roar became like silence in my mind, leaving me to sight and thought alone.

Moving around a curving part of the shoreline, I noticed something on the beach ahead, perhaps 150 feet away. The shadowy mass was moving slightly but I was unable to discern any detail. Straining my eyes in the darkness, I could only make out an outline and slight movement – perhaps 5 to 6 feet long, was it some kind of animal? My mind raced, and my heart picked up a few beats, as I tried to think of any animals in the area that might be that large. Maybe there were two working close together? Whatever it was, it looked like it had found something washed up on the beach. Moving closer, I stopped as I realized that I was alone with nothing but my swim trunks and phone. I was now about 75 feet from it and still could see no details. I stood there, frozen.

Fear is a curious thing. My mind worked through various scenarios and options. There was no sense in going on, disturbing an animal (or two) working on its breakfast in the dark was probably not a good idea. I wanted to get a bit further down the beach but it wasn’t a big deal. Yet, I felt very hesitant to turn and leave. Feeling vulnerable and uncertain, I took a few more steps toward the slowly moving mass. I felt the icy grip of my fear but was curious, and a little defiant.

Moving to within 30 feet, I froze again. I could now see a glint in the moonlight. Did it have some kind of shell? Was something reptilian or amphibian more dangerous in some way? It still had not reacted to my presence which made it even more frightening. I could see it moving slightly as the waves continued to crash upon the beach. Whatever it was, it hadn’t yet noticed me, or worse, wasn’t scared of me. I was still for what felt like minutes. I scanned the beach for other signs of life, anything that might give me a reference point. There was nothing but inanimate shadows; I was alone and within a few feet of whatever was just ahead.

Finally, I committed. I took four more steps, grabbed my phone and flipped on the flashlight. The small beam quickly fell in the shadows, forcing me to move closer – 25 feet, 20 feet, 15 feet, 10 feet. Within 10 feet, I discovered that I had been holding my breath as I exhaled loudly at the recognition of a bundle of mostly deflated mylar balloons moving ominously with the water running onto the beach. Still a little unsure, I moved closer to see nothing dangerous. Nothing to fear here but typical human trash – perhaps an apt metaphor for a future post.

We are wired to be wary of things that go bump in the night. Fear is a survival instinct. Fear is natural, necessary, and limiting. Our instincts come alive to protect us from danger, yet, they are often incorrect. What informed my assessment of my situation? The scary movies I watched as a teen? The news I’ve seen as an adult? The books I’ve read? My limited knowledge of indigenous species living along the beaches of northern Florida? My imagination? All of the above influenced my reaction.

Thinking back on it, would my fear have been more or less if others had been with me? Would we have found safety in numbers or reinforced the truly dangerous notions gathering in our collective conscience?

I’m certain the actuaries among us could find the appropriate path to calculating my true risk in the scenario above but that is not how we work in the real world. Our assessment of risk is typically built on incomplete data, frequently emotional, and always fueled by the tone and tenor of what we put into our brains. We react to the fear based on what we feel while our feelings are fed by partials: partial facts, partial knowledge, partial awareness, and partial understanding. Accurate discernment is quite difficult amid the partials so the safest course is to assume the worst.

A few days ago, I walked past the menacing mylar balloon entanglement and into another few miles of solitude, thought, ocean air, wildlife (I did see stingrays, herons, and crabs throughout my walk), a glorious sunrise, and introspection. Is it possible that something dangerous lurked on that beach? Maybe. But at this point it seems rather silly. I guess that’s the truly insidious, and necessary, thing about fear: at its strongest, it drowns out everything else. 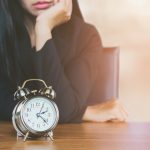