If you would convince a man that he does wrong, do right. But do not care to convince him. Men will believe what they see. Let them see.

A couple of months ago, I found a small box in my office. Inside was a red velvet pouch and a handwritten note. Opening the pouch, I found a large bejeweled ring. At first, I thought someone was giving me their Superbowl Ring or perhaps a memento of an international wrestling championship. Reading the note, I discovered that the ring was from a young man who we had sponsored over several years in support of his travel baseball team. His dad (who works with me) had written the note:

Hayden was going through his trophy case looking at all of the medals and rings that he has won over the past 3 years and he said to me, “Dad, which ring do you think Phil will like the most?”

Hayden reminded his dad that he had told me that he’d get me a winning ring this year and was determined to follow through. At 12, this young man knows how to show-up and keep his promises. I smiled as I put the ring on a finger and watched it swallow my hand. The letter didn’t stop there:

I know he is 12 and it is just a sport, but the funny thing is, you hear the passion in his voice about it and his dreams; it reminds me of the enthusiasm & craziness I heard in yours the first time we sat down and talked. Well, it seems that you weren’t so crazy & with the same work ethic, he won’t be either.

Earlier this year, I wrote a piece entitled The Shadows We Cast in which I discuss the often unseen impression our movements in this life create on the world around us. Reading the note, I was reminded of the importance of the example we set for everyone around us.

For nearly six years, I’ve publicly shared my writing through these posts. In that time, I’ve realized that very few people Like, Share, or Comment on what I write via social media or on my website. However, many people acknowledge things I’ve written in conversations we have.

Our impact on the world works much the same way. We walk through our days going about our business and paying little attention to the footprints we leave. Whether we put kindness or selfishness into the world often seems of little importance. All of those small actions never seem to add-up to much. No one is tallying how many times you let someone over in traffic or speed-up to cut someone off, right? Wrong.

They are watching. Little eyes and ears in your car that seem focused elsewhere absorb everything you do. Your words and actions are seen and heard; and each one leaves an impression. No one around? Guess again. You are making an impression on every person you encounter on the road – anonymously or not. Who you are is being projected upon the world at every turn. Your words and actions matter, even when you feel they don’t.

That note only tells one small part of a much greater story. In-between the lines were the difficulties, confrontations, failures, and uncertainties that we’ve experienced together. Behind the words are memories of watching me struggle in hundreds of difficult moments. Whatever my failings, my overall effort to be good, to do right, and to persist showed through. Passion and craziness? It’s funny how closely those two things are related.

Look at your shadow today and watch where it’s cast. The people it touches are watching. Will you give them an example worth emulating? When those young, impressionable eyes turn towards you, what will they see? What about the older, jaded ones?

As for 12 year old Hayden and his pathway to manhood, what does he see in a father who writes notes of acknowledgement? A father who shares and supports his dreams? Where did he learn to follow through on his commitments? They are watching. 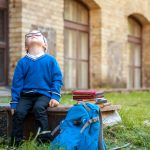