Saturday, November 9, was the final day of our walk on the Camino. We started it with a leisurely breakfast in O Pedrouzo. We were excited to get to Santiago but were in no hurry. The 12.5 mile distance seemed light compared to the previous week of 15-19 mile days. I saw Michelle pop-in to the cafe to grab breakfast but she didn’t join us – we all have to complete the journey on our own terms.

Oxana’s son, George, was sitting for entrance exams for his next level of schooling in Oxford today. She had the mixed feelings of guilt for not being with him, apprehension for him on this being day, and excitement for her walk into Santiago. I found it a bit mind-blowing that a 7 year old would face the challenge of entrance exams. She said he was in good spirits and quite ready. What a big day for Oxana!

Sally and I were ready. Ready for the walk. Ready for arrival. Ready for home. Sally had themed our previous day as “sustaining.” Today, she themed our day as “arriving.” I smiled as I thought of those days when we were just surviving. Once again, there is the Camino emulating life.

Yesterday’s walk felt much more suburban. We moved past the remaining farms and their associated smells and into neighborhoods sitting outside the city. Over the last few days, we’ve passed through forests of eucalyptus trees with their silver-green leaves and calming smell. Like the sycamores we saw planted in uniform rows in the Meseta, many of these groves of eucalyptus looked like they were planted – we even saw one very curious machine harvesting some of them in a clearing. I’ve grown to like them and the strips of bark peeling off of their trunks has become a familiar site along our walk.

We walked among groups of pilgrims all day yesterday though we certainly didn’t see the crowds that move through this leg of the journey in the high season. We saw our Irish family and Jim told us they had read there was snow on the mountain near O Cebreiro – our longest and most challenging leg. I’m glad we missed it. We stopped for lunch at a pilgrim campsite complete with souvenir stands offering all sorts of Camino stuff. There has been surprisingly little of this before now.

The last five kilometers of yesterday’s journey was marked at Monte del Gozo, the “hill of joy.” There is a large monument at the top overlooking a development built for pilgrims including a very large Hostal, food offerings, and an amphitheater. Monte de Gozo is the first point when peregrinos get a look at the spires of the Cathedral de Santiago. The monument was surrounded by a construction fence and our first view of it and the city was a disappointing. I had remember something different from the movie, The Way and then I saw them, two large statues on a hill about half a kilometer away, overlooking the city.

For me, this peak with the statues of the two pilgrims (added in 1993) is one of the most iconic, and impactful, sites we’ve seen on the entire pilgrimage. Their distance off of the Way causes them to be missed by many pilgrims and I was so excited to trek over and see them up close. Here, we had an amazing view of the city and a clear view of the Cathedral. The statues are about twelve feet tall and depict two medieval pilgrims arriving to their first view of the Cathedral de Santiago. I found myself smiling uncontrollably. We were within sight of our destination.

Walking down into the city was a bit surreal. Were we really here? We walked through city streets with no view of the Cathedral we had seen from the hilltop. Santiago is very European-looking with apartments built into the hills and all of the noise and buzz a modern city. We wound through the streets, passing and being passed by, various pilgrims making their way. I felt like I was in a bit of a daze, just walking and looking. None of us said much.

Finally, we wound through some narrow streets into the old part of the city and the beautiful medieval architecture finally finding our way to the plaza in front the Cathedral. It was overwhelming. Our first site of the spires was from the side and my eyes were drawn upward. “YOU MADE IT!,” someone yelled from the plaza to our right as we walked around the corner. Julia was running toward us with Kayla right behind. Hugs, smile, and photos followed. I still felt dazed as we were ushered toward the center of the plaza where many of the pilgrims with whom we’d been traveling for days stood. Rudy and Bert were there. Our Spanish friends: Dino, Carlos, Mark, Joseph, and Peter were waving to us. Pilgrims from Oxana’s first days on her trek were there and we found ourselves in the middle of a frenzy of smiles and chatter. Congratulations! Welcome! We did it!

Our Spanish friends came over and all wanted to shake my hand and give me a hug. The guys pointed to their wives standing to the side smiling. They had joined them here in Santiago for a few days of just being after their boys completed the journey. I had learned that they were from Menorca, a Spanish island in the Mediterranean and they had started their Camino two years ago. I very much wanted to spend time with this group and learn more about them – they were always smiling and had such positive energy. Though language limited our communication, it was alway such a pleasure to see them.

It was so nice to see Julia and Kayla. They had gotten in earlier and were staying in Santiago for one night before going on to Portugal. Julia asked me to air drop a couple of photos we had taken earlier on the trip. I was struck by how familiar these two young women seemed and realized how little conversation we had really had. Weeks of traveling together and our language bonded us in a strange and beautiful way. Familiarity was our bond and I considered the days ahead when we would no longer see them. How often do those we know along our way slowly slip away in the changing hustle and bustle of our lives? How disconcerting it is it when those ties of familiarly are abruptly broken. We spoke little but I realized I would miss seeing their smiling faces.

Rudy hugged us in that innocent, little boy way of his, ukulele still hanging on his back. He talked of the Way and his own challenges along it. The interesting dynamic of his travel with his older uncle who seemed to view him as more of a personal valet than a traveling companion. I realized that I really liked Rudy and hoped that his journey brought some sense of the magical possibility of the world back into his life. He talked about coming back and walking the Camino Norte. I hope he does. He forwarded some photos to me and then spent a few minutes talking to Sally while I tried to capture a few photos of the Cathedral.

Sally and I stood there for a moment by ourselves and looked at the Cathedral, the plaza, and the people milling about. I hugged and her told her I loved her. There was really nothing else to say. I felt emotional as I looked at her.

Looking up at the spires of the Cathedral, the beauty of the detail and this moment struck me. I had to fight back tears. The rain held off for our walk into Santiago and our entry into the Praza de Obraboiro (the golden square) where our friends stood. I realized how impossibly serendipitous it was that we were all there at the same time in the same break in the rain. My mind raced across time and emotion but I couldn’t quite settle it on one place. I was an awkward boy again as all I could was smile goofily and hold tightly to Sally. Did this moment really warrant such emotion? I didn’t bother trying to answer that question.

We parted with our friends and walked across the plaza to the Parador de Reis Catolicos (named after Ferdinand and Isabella) where we were staying. It is a renovated 15th century pilgrim’s hospital now used as a hotel and conference center. As I write this from the breakfast dining room, I can see the Cathedral de Santiago looming above outside of the window as daylight begins to illuminate the plaza below. The Parador is beautiful and an incredible indulgence after 36 days and 500 miles on the Camino de Santiago.

We were able to get our Compostela from the Pilrgim’s office. We saw Jim, Liguori, Kieva, and Lorcan there and Hans even dropped-in looking for some friends. He and his friends were leaving to walk to Finisterre on Sunday. It was nice to see them all.

We spent a couple of hours in the hotel bar with Oxana prior to dinner. I wondered why, four weeks into our journey, we came across this lone traveler and bonded with her so strongly. We asked ourselves, “what draws people together?” Language, shared interests, timing, need – there are all a sorts of answers. We didn’t spend much time trying to figure it out, the Galician wine was quite tasty and our conversation moved easily over much: the journey, the people we encountered, our entry into the Plaza, going home. I smiled as Oxana, now realizing I was writing about our journey, asked me what kind of details I was sharing. I laughed and told her that she had far more protections in my writing now that she had moved out of anonymity. (For any who I’ve encountered along the Way that feel that my impressions were unfair, please forgive the rawness of my writing and read further, perhaps I adjusted my initial thoughts as I learned more.)

Michelle joined us for dinner at the Parador. I really didn’t think she would. We had a lovely dinner of sea bass, lobster bisque, and wine, this time from Rioja. The tone of the dinner was pleasant but the conversation danced around differently with Michelle present. She covers much of what is truly personal to her with sarcastic humor and we left it there. She will be heading to Scotland on Monday. This morning, she remains as opaque as ever. I suspect we won’t see her again.

Today, we will go to the Pilgrim’s Mass at Noon and tour the Cathedral de Santiago (which is closed for Mass as it is renovated but open for tours.) Our hope is for a leisurely day. 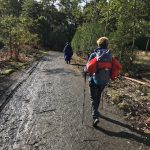 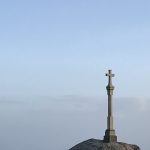