After months of planning and preparation, the time to leave was suddenly upon us. Like so many anticipations, departure itself was anticlimactic. The edge that for so long looked like an end was simply one more beginning.

Walking off of the Boeing 767 in Barcelona was mildly surreal. The bustle of Atlanta was replaced with a hauntingly empty and altogether unfamiliar expanse of glass, walkways, and mountain views. We were herded through what seemed like miles of glass encased halls to customs and a humorous agent asking Sally, in wonderfully broken English, if he should approve my passport or hold me at the airport for a few days. I smiled uneasily as I thought of other countries in which his comment would be no joke.

A few minutes later, my first halting Spanish words were brought to bear as I stumbled through some currency exchange and the young man kindly corrected me, “it ees seenyento, no cinco ciento por 500.” From there, I determined to walk more boldly into my attempts at the language, redeeming myself moments later at a cafe – “dos cafe con leches y un croissant por favor!

A car took us to Lourdes – a journey that took 6.5 hours. Our driver, Fernando, was delightful and the fact that his English was as good as my Spanish made for an interesting, and educational, trip. The Spanish countryside surprised me with its mountainous terrain and random medieval castles and churches scattered along the way. The broad vistas reminded me of northern Arizona, dry with minimal vegetation, and beautiful mountains on the horizon. Crossing the Pyrenees into France, the arid climate turned instantly wet and green. Charming villages pressed-in upon us as we navigated the narrow road through the countryside moving from the ski lodges of the upper mountains down toward lush lowlands and images straight out of a movie. Often, the road was so narrow and the buildings so close that I felt I could reach out the window and touch them on the way past.

Lourdes was bigger than I imagined and a hotbed of activity. We navigated through streets crowded with pelerins (pilgrims) visiting the holy Basilica of Our Lady of the Rosary and seeking the healing waters made famous by a little girl name Bernadette (later to be named a saint) and whose uncorrupted body lies in state in Nevers, France

At first taken aback by the sheer number of people, and my discomfort with my precious Catholicism twisted into a massive tourist event, I was converted as I watched lines of wheelchair-bound visitors being pushed toward the Massabielle Grotto seeking the healing waters running from the rock beneath the Basilica. As I write this at 8am on a Thursday, the faithful are busy making their way toward the Basilique de Notre-Dame du Rosaire and the hope of a closer connection to the Divine in this Holy place.

Twenty four hours into our time in this foreign place, my soul is quieting as I settle into a different place. With the distance, time difference, and help of my team at home, I can already feel myself disconnecting. The language barrier has the effect of helping remove distractions as it isolates my thinking in the midst of a massive group of people – a good thing for absorbing the experience.

Today we will spend more time in Lourdes and then make our way to St. Jean Pied de Port to begin the Camino de Santiago. 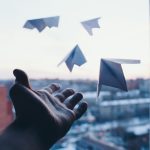