Memorial Day – What We Remember

A hero is someone who has given his or her life to something bigger than oneself.  —Joseph Campbell

M emorial Day was born out of a tradition of honoring the fallen soldiers of the Civil War. The original name was “Decoration Day” and the commemoration was organized by local communities annually. After World War I, the annual tributes were expanded to include all fallen soldiers and eventually became known as Memorial Day. Memorial Day became a Federal holiday in 1971 and occurs each year on the last Monday of May.

What is Memorial Day? It is a day to remember those who died in the service of our country. It is a day to honor their sacrifices. Memorial Day exists for us to come together as a nation and remember that our country would not be the place it is without those who died in her service. Our lives would not be what they are if not for the sacrifice of our brave soldiers.

In the Civil War: By far the most brutal experience our country has ever encountered, the Civil War saw the loss of approximately 760,000 soldiers in the span of four years.  The war also saw the end of slavery and settled a long simmering debate about the direction of our country.

In World War II: After a surprise attack by Japan on December 7, 1941, the United States was pulled into World War II. Over the next four years, America lost over 400,000 soldiers around the world as it pushed to bring the war to an end. The war in Europe was ended in April 1945 and the war in the Pacific ended in August 1945.

In the Korean War: The Korean War was a fight to keep Communist North Korea from conquering anti-communist South Korea and was the fist armed conflict of the Cold War. Between 1950 and 1953, America lost over 54,000 soldiers in Korea. Ultimately, the war ended in a stalemate as China and the USSR supported North Korea against U.S.-backed South Korea.

In the Vietnam War: The unpopular Vietnam War was another battle against communism in Asia. The war itself lasted almost 20 years, from 1955 to 1975 as communist North Vietnam sought to reunify all of Vietnam. American forces were actively engaged in Vietnam from 1961 to 1973 and the war saw over 58,000 U.S. soldiers killed. The U.S. exit from Vietnam in 1973 led to the fall of Saigon in 1975 and the unification of Vietnam under the communist regime.

In the Iraq War: In response to the terrorist attack on the World Trade Center in 2001, the United States invaded Iraq and destroyed the regime of Saddam Hussein. Removing Hussein was easy, rebuilding Iraq as a democratic nation was difficult. From 2003 to 2011, the U.S. lost over 4,400 soldiers in the conflict and subsequent reconstruction.

In Afghanistan: Also a response to the terrorist attacks on the World Trade Center, U.S. military activity in Afghanistan has seen the elimination of the original architects of the attack as well as many other seeds of terrorism. To date, America has lost over 2,200 soldiers in Afghanistan but has not seen a major terrorist attack on U.S. soil since 2001.

Memorial Day is a day to remember our fallen soldiers. Those individuals who died fighting for our country and our freedom – in a formal “war” or not. As I write this post, I realize that the conflicts listed above were ALL controversial at some point and on some level. Imperfect information. Imperfect decisions. Imperfect people. War is never an easy thing nor should it ever be undertaken lightly. However, we live in a brutal world with all of the cruelty of which humanity is capable. Our soldiers accepted the call of duty and fought for something bigger than themselves.

Today, put aside the bickering. Let go of the disagreements. Forget about the differences. Today, let’s just be Americans and honor our fallen for the simple fact that they fell for us – they fell for our Nation. Soldiers ennobled in their sacrifice and worthy of our gratitude. Abraham Lincoln said it best:

The world will little note, nor long remember what we say here, but it can never forget what they did here. It is for us the living, rather, to be dedicated here to the unfinished work which they who fought here have thus far so nobly advanced. It is rather for us to be here dedicated to the great task remaining before us—that from these honored dead we take increased devotion to that cause for which they here gave the last full measure of devotion—that we here highly resolve that these dead shall not have died in vain—that this nation, under God, shall have a new birth of freedom, and that government of the people, by the people, for the people, shall not perish from the earth. 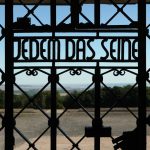 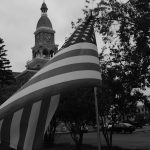