No Longer the Greatest Country?

Freedom is about having choices. Life is about making them.

I n 2012, HBO’s The Newsroom featured a speech by character Will McAvoy (played by Jeff Daniels) that came to be known as the “America is not the greatest country in the world anymore” speech. McAvoy rips into the notion by rattling off a litany of categories in which America ranks poorly: 7th in literacy, 27th in math, 22nd in science, 49th in life expectancy, 178th in infant mortality, 3rd in median household income, 4th in labor force, and 4th in exports. He moves on to claim that we are 1st in incarcerated citizens per capita, 1st in number of adults who believe angels are real, and 1st in defense spending. It was a brilliantly written and blisteringly executed attack on America that left the viewer deeply troubled. McAvoy goes on to more softly describe a kinder, gentler, more admirable America of the past that “made war on poverty not poor people,” “passed laws for moral reasons,” “that built great big things,” “that cared about our neighbors,” “that didn’t beat its chest,” “that explored the universe,” “that cured diseases” etc.

The speech completely missed the point.

Aside from factual errors in the speech itself – for example, according to the World Health Organization in 2015, U.S. infant mortality ranked #5 in the world – the speech focuses on the wrong definition of greatness and characterizes an America of the past unrealistically. I must confess that trying to characterize one country as being the “greatest” is a slippery and indefinite exercise at best, I believe we can still lay a solid claim to America being “great.” As  a home team kind-of-guy, I do believe America is the greatest country on earth but once again, that misses the real point. What makes America great?

Early in his speech, McAvoy dismisses freedom as a “me too” measurement that is offered by 180 of some 270 countries in the world. First of all, America’s history has been a bare-knuckled battle for freedoms: freedom from Britain, freedom from slavery, freedom from dictators who would rule the world, freedom to vote, freedom from discrimination, freedom from unsafe working conditions, freedom from terrorists, freedom from those who would suppress speech, freedom to worship, freedom to bear arms and so on. Our particular brand of freedom is exceptional, not just in its scope but in its implementation. The battles for our freedoms were not kinder and gentler: we’ve had a roller coaster ride getting to our freedoms and our country traces a brutal path through the moral and the immoral to be where we are today. It is a fallacy to believe that our politicians were any more noble or altruistic 100 years ago than they are today or that pursuing our country’s interests on a global scale were any less territorial or self-protective. Freedom is difficult to earn and even more difficult to keep.

McAvoy would be unswayed by this delineation of freedom and would likely argue that other countries offer a similar type of freedom Perhaps, but let me introduce another element. Above, I mentioned the word hope. Hope is a noun that means “a feeling of expectation and desire for a certain thing to happen.” To be hopeful is to see possibility. Some have argued that the “American Dream” is dead. The “American Dream” is rooted in the Declaration of Independence which proclaims that all men are created equal with the right to life, liberty, and the pursuit of happiness. James Truslow Adams further defined it in 1931 by saying that “life should be better and richer and fuller for everyone, with opportunity for each according to ability or achievement” regardless of social class or circumstances of birth. To believe Adams or Jefferson is to hope but one has to choose to believe. America offers much in which to hope if we seek it.

Now, we come to the final piece: happiness. Anyone can pursue happiness, but what is it and how realistic is it to pursue? Happiness is generally defined as positive or pleasant emotion ranging from contentment to joy. What brings us happiness? Family, things, achievement? It is a state of mind with wildly different realizations among our citizens. Here is another definition: happiness is not about having what you want or even achieving your goals; happiness is believing in the possibility of reaching your goals. We are happiest when we see opportunity. We are happiest when we believe in our possibilities. On the point of opportunity, America offers a unique path. Ours is still the land of opportunity. When we choose to pursue opportunity, we find happiness. 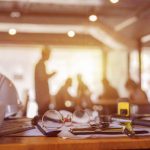