When asked what made him so good, Wayne Gretzky once said, “I skate to where the puck is going to be, not to where it has been.”

A simple enough quotation from hockey’s “Great One,” but it isn’t easy anticipating the best point at which to intercept opportunity. However, the great ones always seem to have a sense of what’s happening just around the corner. Gretzky had great instincts for the game of hockey and was a master of his craft. In our day-to-day life, is it possible to create a system for anticipating opportunities? How do we “skate” to where our opportunities are going to be?

This brings me to the next word in the title of this post: Corcoran. Barbara Corcoran has been highly successful in real estate, is now a “shark” on Shark Tank and has posted some interesting blogs on entrepreneurship and success in the pursuit of opportunities. Two of her recent posts, Expand Before You’re Ready and The Best Entrepreneurs Don’t Know When to Quit give great advice to anyone seeking to achieve their dreams. Simply put, these two posts tell us to push ourselves to grow before we think we’re ready and that resilience is critical to success. Take risks and don’t quit. Once again, sage advice that is not easy to put into practice. How do we know when it’s the right time to “expand” or push ourselves in uncomfortable ways and what really determines our resilience? In other words, how do we know how much we can take?

Looking at these two totally unrelated achievers gives us a model for greatness. Mastering the art of anticipating opportunities and coupling it with the nerve to push our limits sets us in motion. Following up with the determination to “never quit” carries us through to the promised land. But how?

Wayne Gretzky was effective at anticipating the movement of the puck for three key reasons:

My post, The Art of Pushing Your Limits, talks about the nature of risk and ways we can balance our risk tolerance with our desire to achieve our dreams. Barbara Corcoran tells us several stories of entrepreneurs (including herself) expanding before they were ready. In her case, she hired talented sales reps before she had a place to put them. She deliberately pushed past her “readiness zone” by focusing on her dream, the goal of building her business. She did not wait — she knew if she did, all of “the best turf would be claimed by the time I got there.” Courage is feeling fear and jumping in anyway. Corcoran challenges us to be courageous when it comes to pursuing our dreams.

And finally, resilience. In The Best Entrepreneurs Don’t Know When to Quit, Corcoran tells us that on Shark Tank, she looks for entrepreneurs who have shown the ability to overcome adversity. Resilience is what she looks for when someone is pitching an idea. How can we assess our own level of resilience and use it effectively when confronting obstacles? Here are a few thoughts: 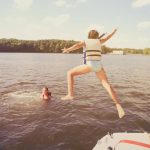 I DARE YOU!Inspire
The Miracle of Entrepreneurial Success: Loaves and FishesSucceed